Amy Demicco couldn't wait for PAX East. The giant convention celebrates gaming of all kinds and has a little bit of everything. The fifteen-year-old event seemingly grows bigger every time, and Demicco—who has a tradition of making a splash at the convention—already had her badge. And it was in her hometown of Boston, Massachusetts.

PAX is primarily a spectacle. From jumbotron screens displaying high-stakes tournaments with casters playing simultaneously for hundreds of fans in front of them and thousands more online to rock star entrances for pro gamers battling for tens of thousands of dollars, it's a treat for attendees with badges to watch their favorite pros and streamers compete on stage.

Never did Demicco imagine that by the time the Mythic Invitational came along, she would be the one playing on that stage.

But MTG Arena has changed Demicco's life. And PAX East was just the beginning.

"I knew that MTG Arena was going to take off as a game, because it was a huge step forward in making Magic accessible to more people," explained Demicco (a.k.a. Amyzonian), who began streaming MTG Arena on the first day the Closed Beta could be streamed at twitch.tv/amazonian. "As my stream grew, I planned on taking time off from working to go back to school and study software development, and in August 2018 that's exactly what I did. I increased my streaming schedule to 20 hours a week. Over that semester, my viewership increased to the point where I was considering streaming as a source of income, though it wasn't enough. When I was extended an invitation to the Mythic Invitational, I knew it was my opportunity to go from part-time to full-time streaming. I also got financial support from some sponsors, most notably TCGplayer, which have helped me turn this hobby into the most wonderful day-to-day job I've ever had."

Next up: Mythic Championship III. Demicco is one of the challengers who will take on the 32 Magic Pro League members in a high-stakes weekend of MTG Arena play with a total prize purse of $750,000. Every competitor at the event has a unique story; Demicco's is more unlikely than most.

In an emerging field that creates stars overnight but leaves countless languishing, Demicco's path to full-time streaming has taken longer than most. The 28-year-old first began streaming fifteen years ago—long before the existence of Twitch—and stuck with it even as the early websites she streamed on would occasionally disappear.

"I tried streaming because I heard about it from one of the forums I frequented; I was a very early adopter," she recalled. "I love talking to people, and streaming gives me an environment where I can chat with lots of people. The audience for my streams over time has greatly fluctuated from single digits to hundreds of viewers and back. I've streamed a variety of games in addition to chatting, cooking, crafting, and dancing. Since I started streaming MTG Arena as my exclusive game, my viewership has climbed steadily. I am only on the brink of being able to stream full-time, and I'll have to return to working a salaried job when I run out of funds, but I love streaming and will continue to do so until I can't anymore."

That meant the Mythic Invitational and its eye-popping $1 million prize pool had a lot on the line for Demicco outside of cash prizes. A deep run could boost her fledgling stream, while a quick exit could have lasting implications. Entering a tournament against the members of the Magic Pro League only stacked the odds further against the hopeful. 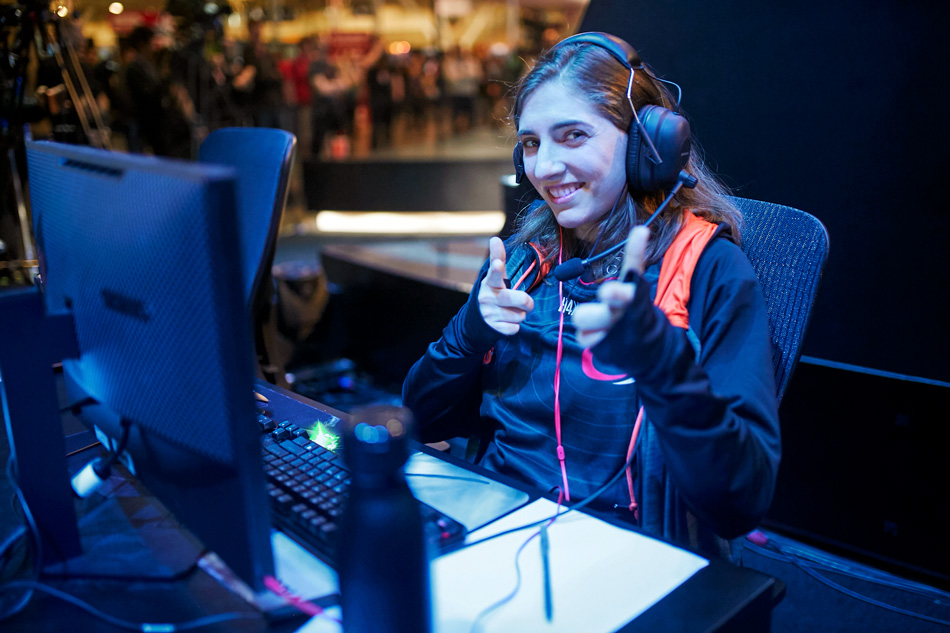 Demicco went into the Mythic Invitational with guns blazing.

Things got off to a poor start, as Demicco took a quick loss in the first round to Luca "LegenVD" Van Deun. But with her back up against the wall, she went on one of the tournament's most inspiring runs, rattling off four straight victories—including wins over MPL members Andrew Cuneo and Christian Hauck—and closing it out with a revenge win over Van Deun to advance to the Top 16.

"Getting the opportunity to compete in such a huge event was amazing," Demicco said. "I normally don't play to win, but I put a lot of time into preparing for the event. It was strange being in a room with so many pro players and streamers, especially at an event I am used to attending. I really liked getting to meet some of the other competitors, especially the women.

"My goal was to have fun and not freak out too much under pressure, and I think I did a good job of that. It gave me an introduction to esports, and an introduction to many people I am happy to be friends with. It drew a lot of eyes to my stream, especially after some of my smack-talking was aired."

Life for Demicco looks a little different these days. The college freshman who discovered Magic through preconstructed Commander decks almost a decade ago is now a full-time streamer and headed to the Mythic Championship. While she may have never expected to be here, Demicco has proven she can make noise deep into a tournament. She's managing her expectations for this tournament, but one thing is for sure: she has a plan.

"This is an opportunity to strut my stuff and play hard on a competitive stage," she explained. "I don't enjoy playing many of the meta decks in the current Standard, so I'd rather lose doing what I love. I'm expecting to lose early in a glorious blaze of creature cards while my opponents sit on their planeswalkers."