Every few months, I get the pleasure of examining Historic through the lens of change—how has MTG Arena's "eternal" format evolved since the last big event? With any other eternal format, the answer would be not much, but Historic is unique in that regard. In addition to new set releases, Historic has received regular injections of curated cards through various supplemental releases, helping the format grow at a steady pace while maintaining a distinct feel.

So how has Historic evolved since the Kaldheim Championship? Well... buckle in and let's find out!

The release of Strixhaven brought with it the Mystical Archive—63 instants and sorceries from throughout Magic's history, with gorgeous new art, much of which would be added to MTG Arena for the first time. After seven cards on the list were "pre-banned" due to power level concerns, we were left with a grand total of 34 new cards being introduced to Historic in what is perhaps the most impactful supplemental release the format has seen so far.

In the month-and-a-half since the release of Strixhaven, we have had a chance to see the new cards in action, and they have not disappointed. Whether improving existing archetypes or helping spawn entirely new ones, the Mystical Archive cards are here to stay, which means we should get to know some of those cards and decks better.

The big story of the May Strixhaven League Weekend was . The black instant combined with spawned a variety of almost-singleton combo decks in order to create a two-card instant-win. Stanislav Cifka used this build of the deck to lock up his spot at the World Championships:

Ultimately the two-card combo was too cheap, too consistent, and too powerful, which lead to the banning of Thassa's Oracle in Historic on May 20. While this was a big blow to the deck, the Pact archetype is not completely dead, with ready to do its best impression and be the new win condition. This downgrade in speed should be enough to keep the deck from being dominant while still allowing it to have a potential place in the new meta.

Blue decks of all flavors in Historic have embraced with open arms, and its presence is a recurring theme you'll notice as we go through the format. Perhaps the most obvious deck to get an upgrade was Azorius Control:

There was a lot of hype around coming to Historic, and rightly so. The card is not just a cheap draw spell, it is also a way to protect your cards in hand from a discard spell and even does a mean impression with a wall timed shuffle effect. There have been entire articles written about and its many applications, and I look forward to putting those applications to work in my blue decks for the foreseeable future.

Not only is an unconditional two-mana counterspell, it is also a great tempo play, making it a perfect addition to decks like Dimir Rogues:

Up until this point, the only format I'd had the pleasure of playing in was Cube Draft. While not the most intuitive choice, the cheap interaction spell fits perfectly into the fast-paced environment of Historic, and it has already been adopted by many of the blue decks in the meta.

One of the most powerful graveyard enablers of all time, 's ceiling depends on the payoffs available in the format. For Historic, was the key piece of the puzzle needed to finally make the fan favorite Izzet Phoenix archetype viable:

brings a level of speed and consistency to this deck that puts it firmly in the running as one of the best "new" archetypes to join the Historic Metagame, and I expect to see a good share of it at the Strixhaven Championship.

is almost like a reanimation effect for your instants and sorceries, giving you the ability to cheat on mana costs/color restrictions or just rebuy powerful effects. In a format with cards like , the possibilities seem endless for how good this card can be in the right shell. So far, has been making a splash in the new wave of Jeskai Control decks:

Being able to discard Magma Opus to create a treasure, and then use or to cast it from your graveyard later is extremely strong. Jeskai Control gained a lot of new tools from Strixhaven, and it has quickly risen to overtake Azorius as the control deck of choice for many in the format.

As a well-known apologist, I've been waiting eagerly for more effects in Historic, and my patience has been rewarded. does not have a history of doing fair things, and I don't see that changing in Historic. Take a look at this exciting Jeskai Turns deck:

There's a lot going on in this deck, but it all boils down to using to power out a . Once you're there, you have a pretty good shot at chaining together enough turns to end the game using and from Velomachus' attack trigger. This deck is explosive, consistent, and with the right build, could be a real force to be reckoned with in the metagame.

has been the bane of aggro players for 15 years, changing the math required to close out games and sometimes buying that extra crucial bit of time needed. Jeskai Control decks in Historic have already adopted the versatile burn spell, but it has also started popping up in a new Boros Midrange deck:

This deck has been putting up some great results on the ladder, but it has yet to prove itself in a tournament environment. Having access to a great suite of disruptive tools and powerful threats is not to be taken lightly, and I'm curious to see if this deck will make a showing at the Strixhaven Championship.

Depending on a deck's game plan, can be as good as without the life loss. This makes it an attractive option for many aggressive decks that look to take their opponents' early game plays and end the game before the more expensive cards come into play. This is the case for Dimir Rogues, as well as decks like Orzhov Auras and Rakdos Arcanist:

Despite its success at the Kaldheim Championship and the new discard spell, Orzhov Auras has fallen a bit out of favor in the current metagame. Rakdos Arcanist on the other hand has been continuously gaining new tools. Both decks are still extremely powerful, and either could rise again to sneak up on an unsuspecting metagame.

The only card to receive its first printing in the Mystical Archive, is an interesting design evolution of an effect we've seen many times from green in the past. hasn't managed to find a home in Historic yet, but one place where it is being tested is in Jund Sacrifice:

Whether becomes a mainstay in Jund has yet to be seen. One thing is certain though: with or without , Jund Sacrifice remains a mainstay in Historic. The resilient archetype refuses to go away, and I expect to see it again at the Strixhaven Championship.

The Mystical Archive has, without a doubt, changed the landscape of Historic. Many of the top decks in the format feature at least one card from the it (or in the case of Jeskai Turns, five!), and this feels like only the beginning. Of the 34 new cards introduced to the format in the Mystical Archive, only a third of them have started seeing competitive play so far. For many others, it feels like only a matter of time before the right tools become available to give them a chance to shine. 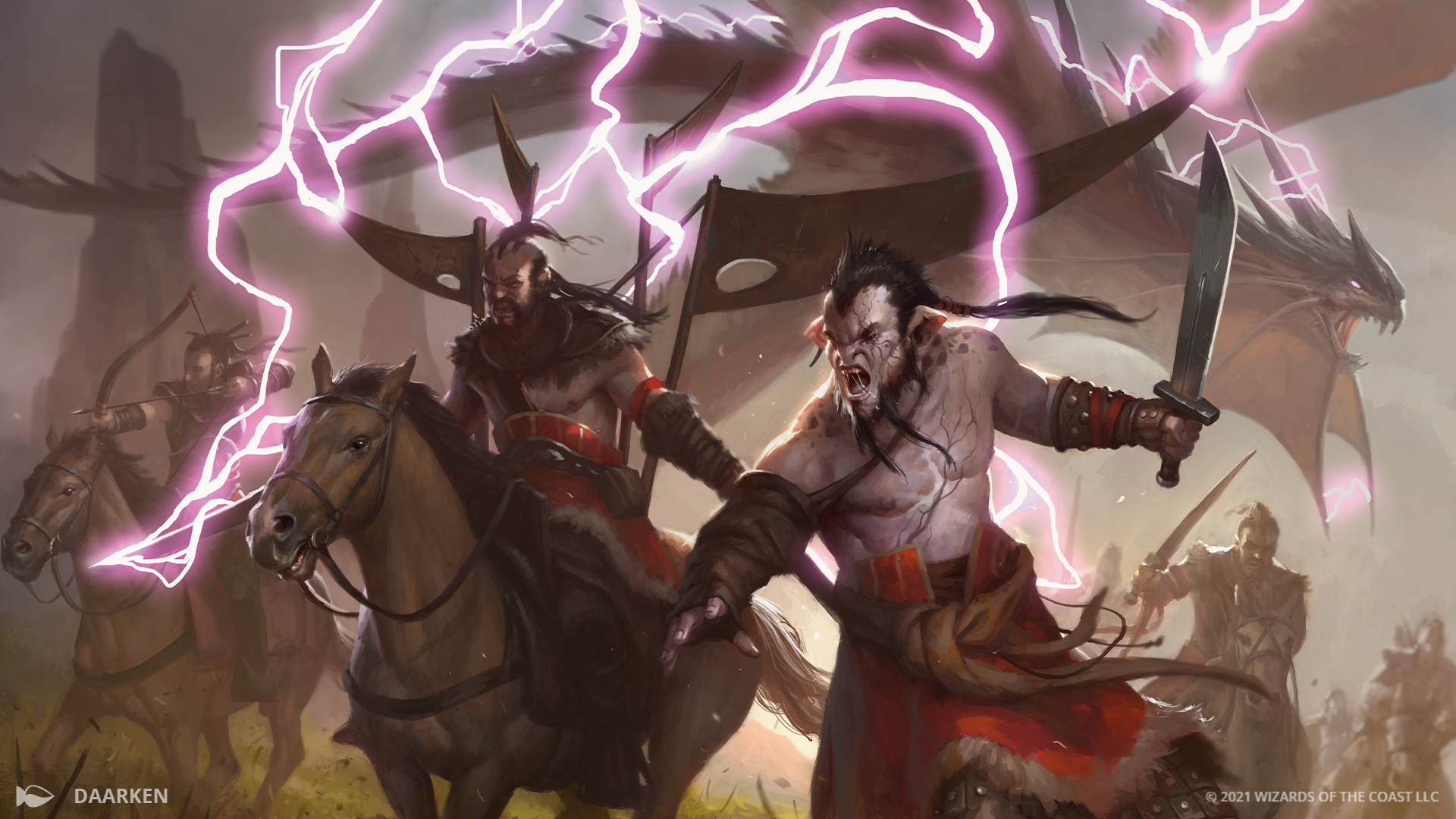 I want to leave you today with some speculation for the upcoming release of Historic Anthology 5. At the time of this writing, the set is not out, and I have not had a chance to play with the new cards in the meta yet. Instead, I'd like to talk about my top five picks for cards that we may see at the Strixhaven Championship:

5. —Historic Anthology 5 is adding a lot of tools for two different artifact-based archetypes. If there is a real artifact deck in the meta, will be a useful sideboard card for decks like Jund Sacrifice and Gruul Aggro.

4. —This is the first proper two-mana ramp spell to be added to Historic. The ability to get snow dual lands does not hurt either, and I could see this being an inclusion in the Sultai Ultimatum deck.

3. —This powerful instant packs a lot of punch and can go a long way towards finishing a game. I could see Gruul Aggro using this to combat the life gain from cards like .

2. —One of the best pieces of graveyard hate ever printed, will be a big sideboard upgrade for non-graveyard-based decks that won't be hurt by removing their own graveyard.

1. —The crown jewel of this Anthology, has four incredible modes. This card has been a modern staple for years. I expect it to see play in any deck that can cast it, like Jund Sacrifice and Rakdos Arcanist, and it may even spawn new archetypes like Grixis or Four-Color Control.

As a bonus, here are the top three Anthology cards I'd love to see at the Strixhaven Championship (however unlikely):

The Strixhaven Championship is just around the corner, and I can't wait to see what players are able to come up with for Historic. The format feels fresh, the decks are exciting, and anything seems possible. I'll be at the news desk all weekend to break it down for you on twitch.tv/magic, alongside the rest of our incredible coverage team. I look forward to seeing you there!