This is the fifteenth time I have written an article introducing a Hall of Fame class. When you look back at past inductees you see some of the all-time greats of the game: Jon Finkel, Bob Maher, and Kai Budde headlined the first three classes to be enshrined. Today I get to reveal which players will be joining that exclusive club.

It was just a couple of weeks ago that I wrote about the impending balloting. We introduced some of the new members entering the ballot this year, talked about the change to the counting stats that qualified players to be on the ballot, and mentioned a shorter window for ballots to be submitted. And, to that last point, after a mere 25 days since that article went live I am proud and excited to introduce you to the 2019 Class of the Magic: The Gathering Hall of Fame. 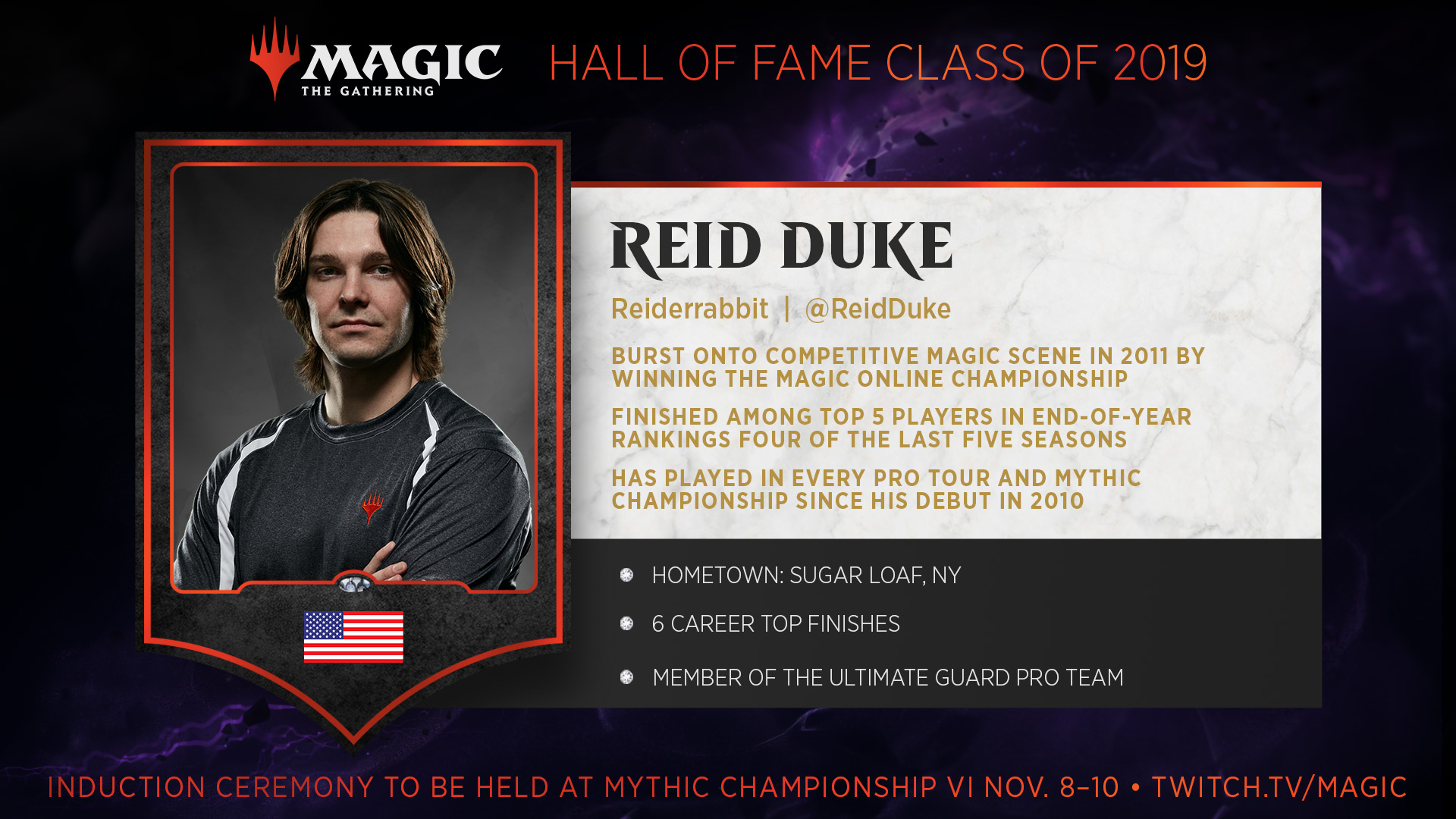 For the first time in the 15-year history of the Hall of Fame only one player received enough votes to be elected. Congratulations to Hall of Fame-elect Reid Duke who appeared on 94.28% of submitted ballots. Players need to appear on 60% of the ballots in order to be elected. That was raised from the lower bar of 40% in the earlier years of the Hall's existence, but even with that previous standard this year's class would still have just one inductee. Here you can see everyone who received at least 10% of the vote.

Duke's 94.28% is the third highest total across ballots in the history of the Hall of Fame, exceeded by only Jon Finkel's 97.1% and Luis Scott-Vargas's 95.6%. It's also one spot ahead of Kai Budde who "only" received on 90.4% of the vote, although that was a year with more "slam-dunk" candidates than rings available to be handed out so one would not be crazy to think that some percentage of gamers gamed the system.

I caught up with the Sugar Loaf, NY resident after he received the fateful call from Scott Larabee letting him know he had been elected to the game's highest honor. Born in 1989 and playing the game since he was 5 years old when he and his older brother Ian were each given a Starter Pack–Ice Age for Ian and 4th Edition for Reid–neither player has put the cards down since. As the two brothers puzzled out the rules from the tiny enclosed booklets neither of them had any idea how profoundly their lives would change from a mere deck of cards.

Duke reflected about the arc of his life from when he peeled open that cellophane wrapper to his current role in the game as a mentor, teammate, content creator, and now Hall of Fame-elect.

"Everything about me is tied in some way to the game. My values of honesty, sportsmanship, self-improvement, and open-mindedness all come from a lifetime of playing Magic." Duke said. "I've met so many great people, and used the game to strengthen relationships with people that I already knew. Now that I'm in a position where lots of eyes are on me, and where I might have the opportunity to set an example for younger players, my life with Magic has become much more than simply playing the game."

Duke was always a competitive child, and was drawn to playing tournament Magic for as long as he could remember. He was a fixture at local tournaments but it wasn't until his teenage years that he took those first steps toward becoming the ubiquitous global tournament presence he is today. And it wasn't until after high school when digital Magic launched his career in earnest.

"I traveled with my brother and friends to two or three Grand Prix tournaments while in high school and I absolutely loved the experience, but I never really had the means to travel as much as I wanted," Duke said. "The big breakthrough was when I started playing Magic Online in college. Finally, when they introduced online PTQs and the MOCS, I had opportunities to compete that I never would have had otherwise." 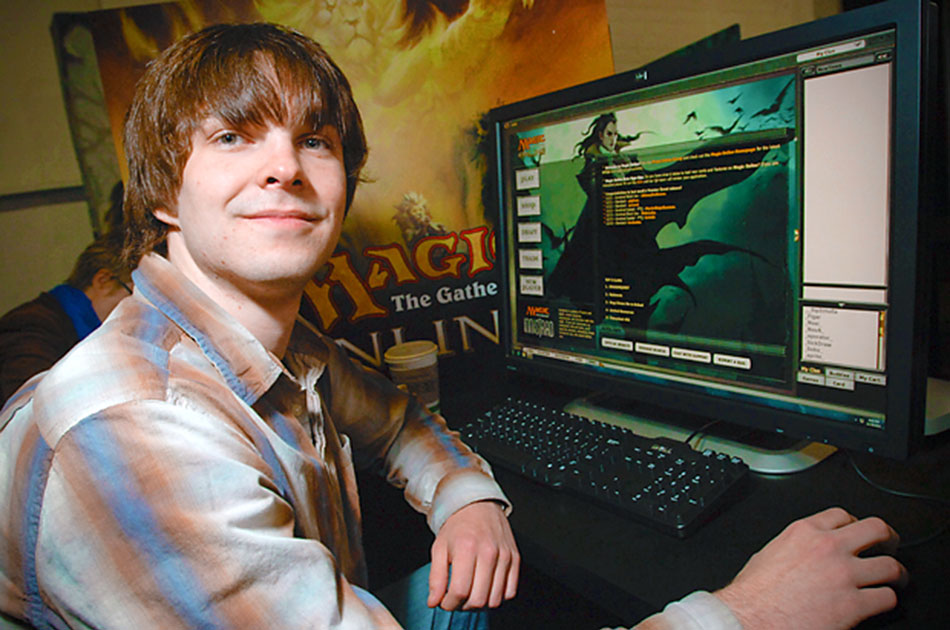 His first Pro Tour came in 2010 in Amsterdam when he earned an invite by winning a spot at the Magic Online Championship coming up later that season. In many ways that tournament was a harbinger for trademark Reid Duke behavior. For one thing he played Jund.

"Haha, laugh it up," smirked Duke, who also would not let himself get down after a rocky start to his PT career. "I started out 0-6, but I still had the time of my life and stuck it out to earn two good, honest wins at the end of the day."

Duke struggled at that level of play early in his career with his first six invites earned on a one by one basis. The tide would turn for him at the World Championship in San Francisco in 2011–his sixth Pro Tour. It marked the first time he posted a winning record and earned enough Pro Points to reach Gold level in the Pro Players Club, qualifying for multiple events for the first time. And on top of that there was the whole matter of the Magic Online Championship taking place that weekend.

"Winning the MOCS was the first accomplishment that felt like it could set me apart. I finally had a title, instead of just being 'some guy who plays a lot,'" Duke said. "Although we tend not to talk about these things, it also marked the first time in my life where I had a standing balance in my bank account, which gave me a lot more freedom in pursuing my Magic goals in the years to come."

Magic Online played a huge role in Duke's career, something he had already identified when I interviewed him for the MOCS in 2010 on the eve of his third Pro Tour. Without the means to travel for tournaments he relied on the online version of the game to qualify repeatedly, while many of his peers were relying on physical tournaments like GPs and PTQs. It also fed his near-insatiable appetite for high-level competitive play.

While he had nabbed Gold, earned his first title, and finished second at the World Championship in 2013, Duke was still chasing something that eluded him throughout 2012 and 2013: a Pro Tour Top 8. That would happen for him in May of 2014 during Pro Tour Journey Into Nyx. As someone who had followed Pro Tour coverage for even longer than his playing career, the glaring lack of a Sunday finish became a chip on his shoulder. He found himself in the feature match area deep on Saturday playing against end boss Guillaume Wafo-Tapa for a win and in to his first Top 8. 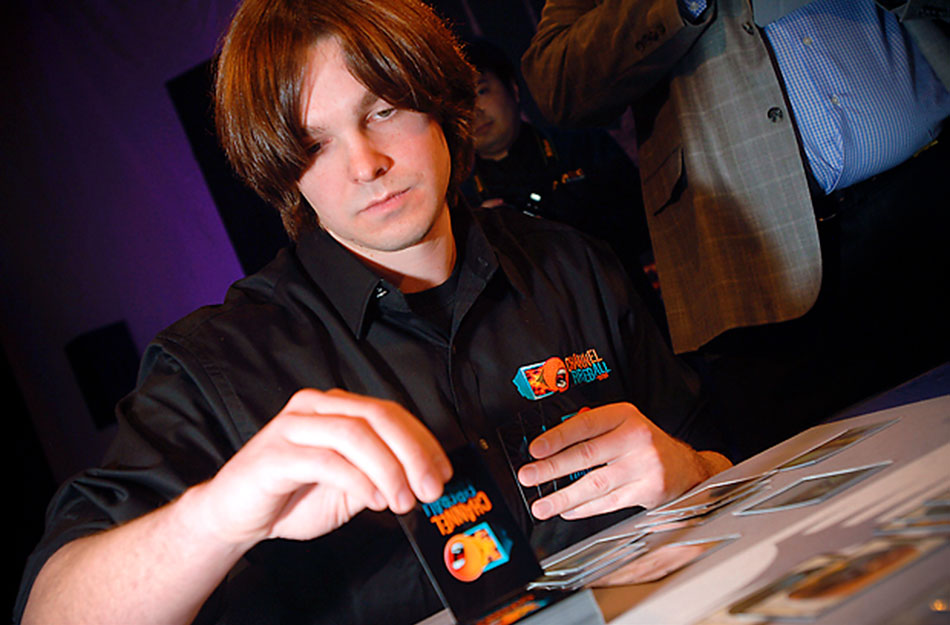 Duke's first Pro Tour Top 8 was a milestone achievement on his road to Hall of Fame.

"When I won my win-and-in match against Guillaume Wafo-Tapa, all of my friends and teammates were waiting for me on the sidelines. There was an endless amount of congratulating and hugging," Duke said. "It was one of the more memorable moments of my life. I'm almost thankful that I had to go through so much effort and frustration before I made it to that point, because the feeling of a life-long goal finally being achieved was priceless."

There would be no slowing down from that point. He racked up three more Pro Tour Top 8s, piled up 23 GP Top 8s with six victories, and even won the Pro Tour Team Series with his Ultimate Guard teammates. The Hall of Fame is about more than just results though and Duke is known as a content creator, teacher of the game, and beloved community figure.

"My proudest creation is my Level One course, which you can still find on the Wizards of the Coast website," Duke said. "It took me a year of hard work–a year where my tournament results really suffered–but it was totally worth it. It's rewarding to be able to put into writing two decades of knowledge about Magic, and to impart that to readers who want to improve their game."

All of this made Duke a slam-dunk first-ballot Hall of Famer for almost anyone with a vote, but Duke tried his best to not allow himself to think that he would be getting sized for a ring even when his friends and teammates would tell him that he was a lock.

"In the end, all I could do was to let my last ten years stand for themselves, and it would be up to the voters," Duke said. "Just like every year, I took my own ballot very seriously and tried my best to submit responsible votes." 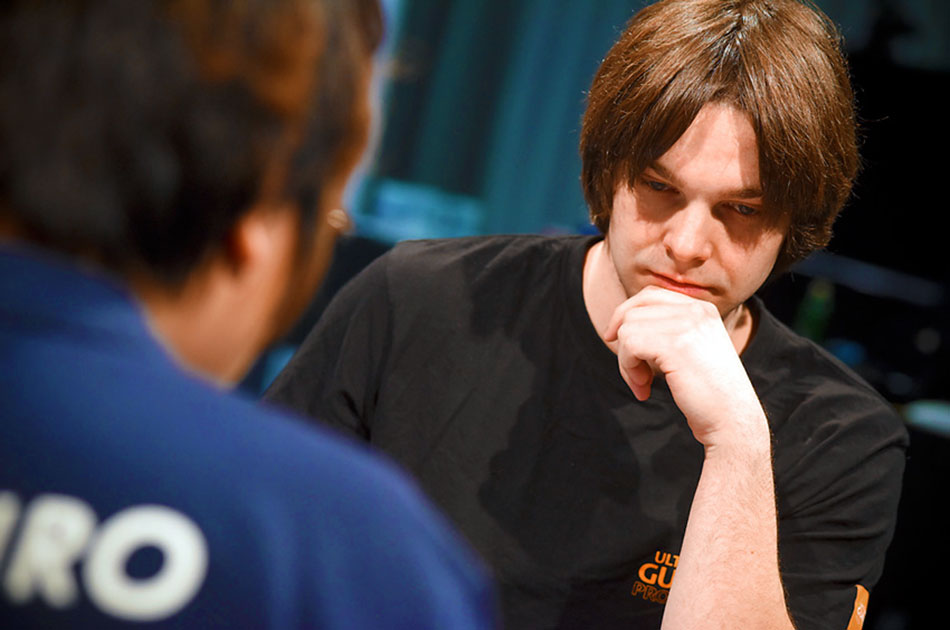 Duke was rarely without his characteristic smile, but he's always been sincere and respectful as a competitor.

The call did indeed come–the only such call Scott Larabee would make this year–and the ever quotable Duke found himself at a loss for words.

"I asked him 'What do people usually say in this situation?' There are simply no words for being elected to the Hall of Fame," Duke said. "Anything I could say would be cliché and fall short of really conveying what it means to me. I get to see my picture next to the legends of the game whom I've looked up to for almost two decades."

This is normally the point in the interview where I ask players about how the induction will or won't change the way they play the game. But the game itself is in a state of change, and that was on Duke's mind as he looked forward to the induction ceremony.

"There's a lot of nostalgia that comes with seeing things I've loved for years go away. But I'm also hugely optimistic about the future of Magic," Duke said. "As a newly elected member of the Hall of Fame, I hope to stand for the incredible history of the game while also being a leader as it enters its greatest chapter yet."

That's not to say he doesn't still have some unfinished business. Every player would love to win a Mythic Championship, but the trophy that Duke wants more than anything is the one that eluded him in 2013.

"My biggest remaining goal is to become World Champion, which is something I've dreamed about for most of my life, and something that has taken on extra weight after my runner-up finish in 2013," Duke said. "Although I've competed in the World Championship half a dozen times, I treat each time as though it could be my last. I'll be putting everything I have into making sure I can be at the 2019 Championship."

Duke will have the stage to himself at the induction ceremony and I look forward to what I am sure will be an emotional speech more than two decades in the making. Ahead of that, he took the chance to single out a couple of people who started the journey with him and whom will surely be in attendance for the ceremony at the Mythic Championship in Richmond this November.

"It's truly taken a lifetime of supportive friends, family, and teammates in order for me to get to this point," Duke said. "But when forced to narrow it down, I'd have to name my brother, Ian, and my cousin, Logan [Nettles]. The earliest stages of my career were the most difficult, and these are the two people that have been with me every single step of the way."