The story of the Top 8 was one of nerves meeting skill. With a Top 4 at Magic World Championship XXVI on the line, managing mindset is as important as managing matchups. Here's how the Top 8 of the tournament played out. 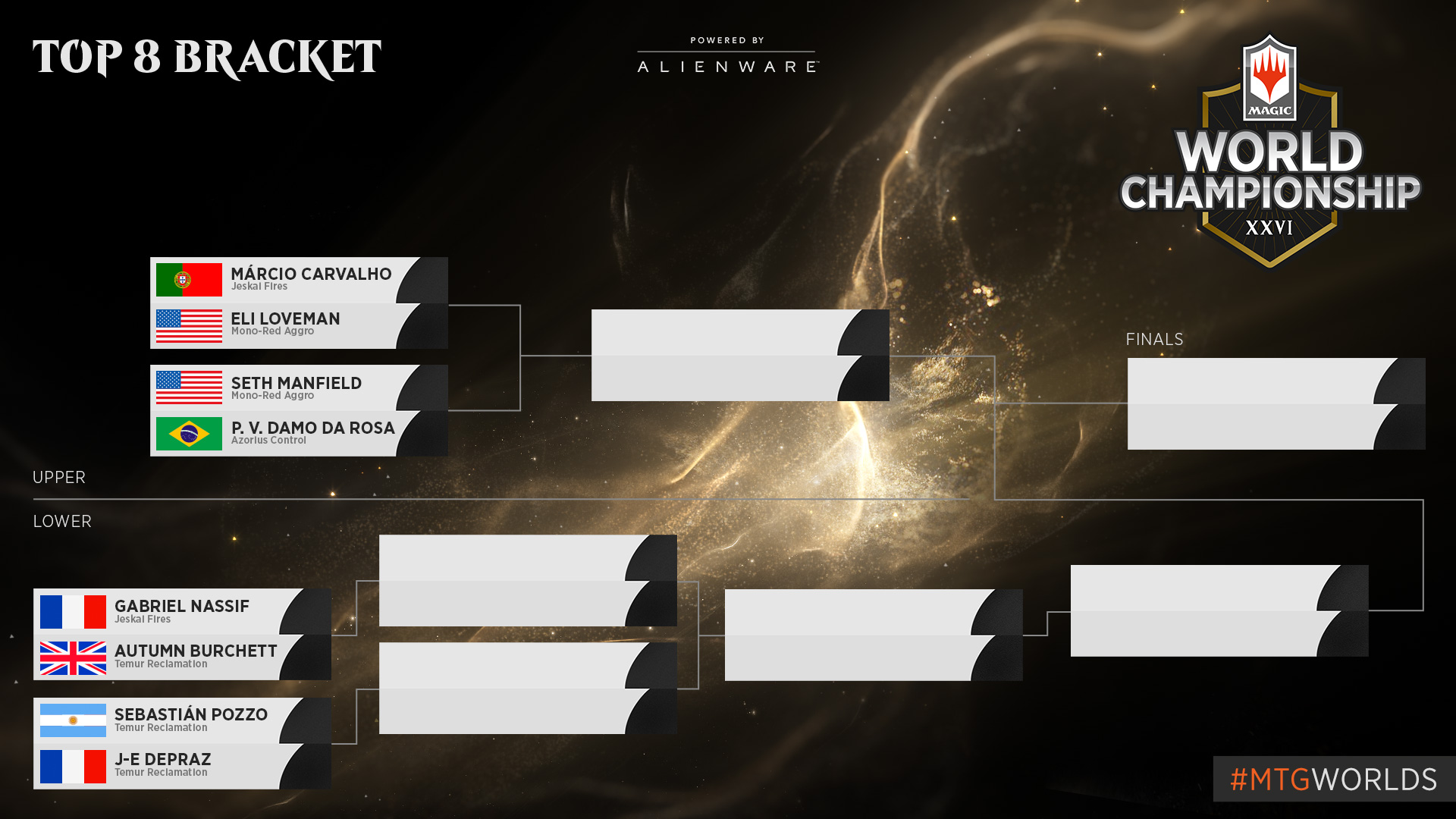 Due to the unique format of this tournament, four players—Paulo Vitor Damo da Rosa, Marcio Carvalho, Eli Loveman and Seth Manfield—entered the Top 8 on the top side of the bracket, and needed just a single match win each to lock up their spot in the Top 4 early.

That began with Manfield and Damo da Rosa, two Magic Hall of Famers with success at the highest levels of the game for many years. Manfield won the World Championship in 2015, and Damo da Rosa is considered—at worst—one of the top three players to ever sleeve up 60.

In the first game Manfield kept a slow hand in the opener, and Damo da Rosa demonstrated exactly why he had teched out his Azorius Control deck to handle aggressive starts. into into multiple copies of and shut down everything Manfield could muster, and a came along shortly to lock things up.

It was another innovation that gave Damo da Rosa the edge in the second game: Manfield had a strong start backed by , but getting Damo da Rosa down to 12 life was as close as Manfield got. plus its Pegasus companions slammed the door and sent the Tempo Storm member into the Top 4.


Now Damo da Rosa was just two matches away from taking home the only Magic trophy he hasn't yet. But Manfield wasn't going down without a fight. 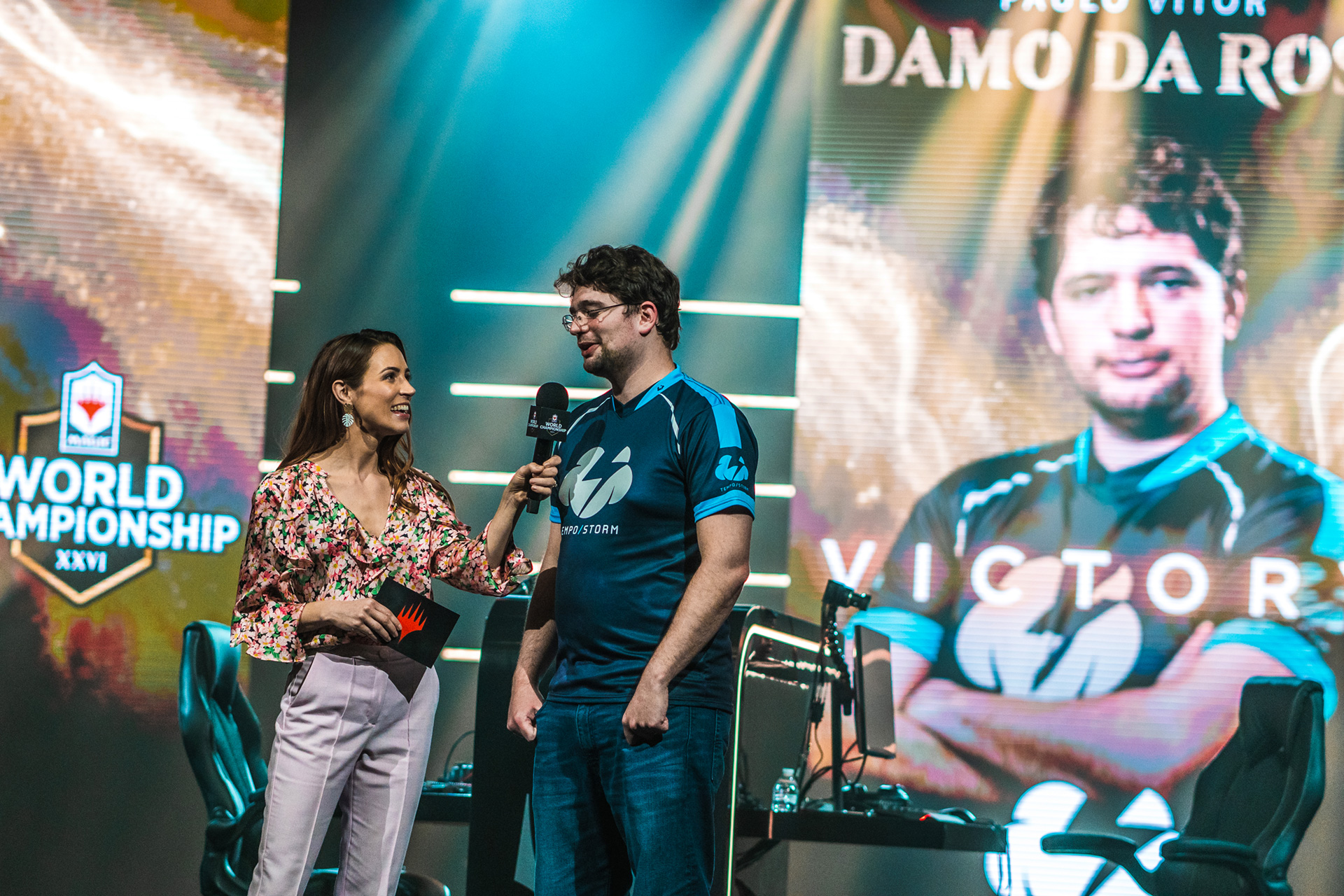 I really wanted to win that one vs @PVDDR but he played great and congrats to him. Time to regroup because I'm not out yet #MTGWorlds

Next, it was Carvalho's turn. He boldly proclaimed before the tournament that it was "win-or-bust" and his dominant start proved he was ready to deliver. Facing down Loveman's Mono-Red Aggro deck, he did what Jeskai Fires does best: develop a huge board out of nowhere. When he was able to remove from Loveman's side, he had enough damage to end the decisive game and propel himself into the Top 4.

After the match, both the undefeated Carvalho and his upcoming Top 4 opponent Damo da Rosa (whose only loss came to Carvalho) were all smiles—and hungry for more.

"I feel like I've been a bit lucky. Everything's been going my way," the Hareruya pro said. "One of my best matchups is Mono-Red and that's what I wanted to play against, so it's great that I've played against two of them already."

For his part, Damo da Rosa was ecstatic with the Top 4 but ready for more.

"It wasn't really win-or-bust for me coming into the tournament, but now that I'm here I want to win it all," he said with a laugh. "I feel like our deck had good matchups against most of the field, so I'm glad it's worked out."

🇫🇷 won the last WMC.
🇺🇸 won the second to last Worlds.
🇧🇷 and 🇵🇹 are both waiting for over 10 years for another World title. Sorry Seth and Gab, but now its our time, the world will speak portuguese again.
GL @PVDDR and @KbolMagic tomorrow.


With two spots gone, six other players battled to round out the final four.

With two spots locked, things shifted to best-of-three matches for the remaining players in the lower side of the bracket, and the action kicked off with Autumn Burchett and Gabriel Nassif. Coming off a string of losses that put his back up against the wall, Nassif took the first set between his Jeskai Fires and Burchett's Temur Reclamation, and as they battled in a lengthy slugfest the matches certainly provided for some exciting moments, such as when Burchett deployed a single that ended up getting copied twice with , once by each player.

The third and deciding match, however, belonged to the Hall of Famer. Nassif's Jeskai Fires deck came out of the gates perfectly, sealing Burchett's fate by deploying to turn off instant-speed tricks—and all the value could offer—and then closed out the match with a -stolen Explosion to move to the next round.

Meanwhile, Sebastián Pozzo was squaring off against the second French member of the Top 8—Jean-Emmanuel Depraz—who was another Temur Reclamation player trying to win the uphill struggle against Mono-Red. It was a matchup that the red players had dominated all weekend, but Depraz kept things interesting. He had a chance to take the match after drawing a crucial to clear out so he could then deploy to clean up the rest of the creatures and avoid any leftover 1/1s from Anax.

But Pozzo was ready with the perfect answer.

With that, Pozzo advanced to face Manfield, who had lost in the upper bracket but was still alive for a Top 4.

But first it was time for Nassif to battle it out with Loveman in a grudge match after Loveman beat Nassif on Friday. And when it counted most, Nassif's Jeskai Fires deck delivered for him exactly the way it had in the hundreds of matches he tested against Mono-Red.

"He mulliganed a lot—five or six times over the matches," Nassif explained. "I had turn three a lot, when I was on the play I got to kill his first two guys before he played Anax. In our testing the matchup was really good. On the ladder when we were testing everything was red and we were winning like 80%. I think the matchup played out the way it's supposed to be."

If Nassif is to become the World Champion, he'll need to dish out one more dose of revenge.

"I don't want to play PV (Damo da Rosa), but if I want to win the tournament I have to," he admitted. "He beat me pretty badly yesterday."

With one final spot in the Top 4 available, it came down to a mirror match—and the ensuing match between Pozzo and Manfield was a masterpiece between two expert Mono-Red players that went down to the wire in nearly every game.

It was Manfield who opened things up, demonstrating the power of the Mono-Red deck's latest iteration: equipped with an . The entire match would rest on who Could "Believe in the ‘Cleave."

But Pozzo is a Hareruya pro and former Constructed Player of the Year, and he's been on the World Championship stage before. He was down, but he wasn't out. He fought back in the next set, using to make mana to pour into , turning his army of 1/1s into a lethal force to force a final match.

It all came down to a third and final game in the third and final match. Manfield, who recently signed with Team Envy, has been blazing a new path this weekend. In the past he hewed close to the typical Magic pro standard: stoicism and quiet in victory. But he's embracing the new world of Magic, and his bold interviews have become instant fan favorites over the weekend.

So when it came down to a single game win-and-in, Manfield's nerves were steady, and his play flawless. And he continued to "Believe in the ‘Cleave."

Watch out, he has his eyes on another #MTGWorlds title! @SethManfield joins the Top 4 in Hawaii. Congratulations! pic.twitter.com/D2WoNTzWSi

I'm finally out of #MTGWorlds, I'm super happy with my result and overall play. I have a ton of room for improvement and that's amazing! What a great game! Thanks everyone for the support. Tomorrow I will be rooting for @KbolMagic to finally hold a well deserved trophy.


And, of course, Manfield had one more epic interview to give.

The Top 4 would return Sunday to see who would claim the $300,000 first place prize—and Magic's biggest trophy. 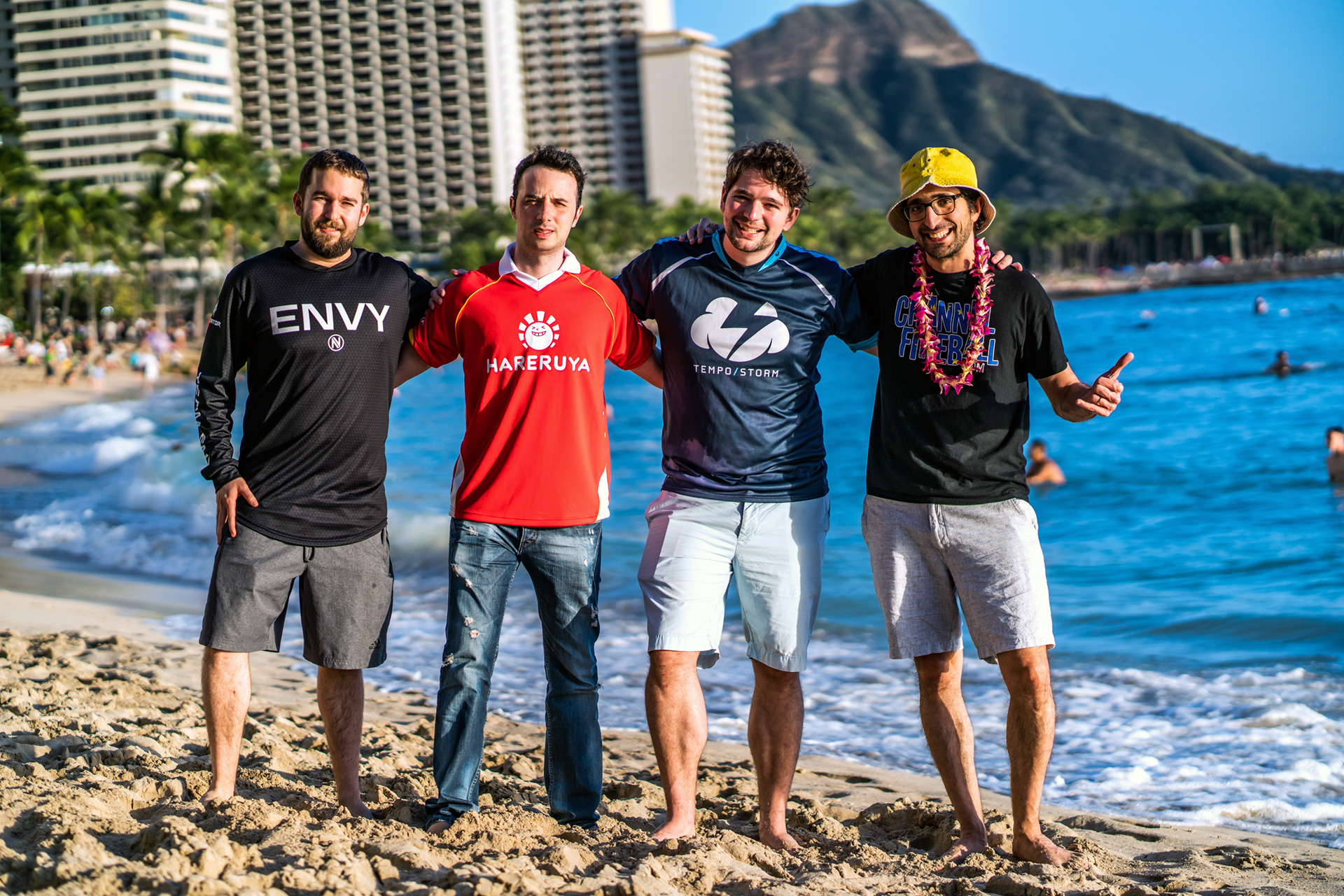