Hello and welcome back to Metagame Mentor, the weekly column in which I highlight the decks to beat in Constructed on the path to the Pro Tour. Today, I'll take a brief look at Modern before moving on to my main topic: the Alchemy metagame breakdown for Arena Championship 1!

Thank you to everyone who came out to our Modern $10k 3v3 Team RCQ at #CardMonsterCon Lexington!
And congratulations to Zoe Riederman, Mason Clark, and Jesse Robkin of Team Galoomba for winning 1st place!
Check out the Top 4 Team's decklists from the event!

The finals of the Team $10K at the Card Monster Con in Lexington featured a familiar name and a familiar deck. Jesse Robkin, after crushing NRG events and writing an in-depth guide on her Jeskai Breach deck, once again took this hot new Modern archetype to the finals of a major tournament. In fact, both teams in the finals had a Jeskai Breach player.

As Robkin aptly wrote, "It's been a good month for in Modern."

Daniele Frontuto with the deck Grixis Shadow is the winner of the Grand Open Qualifier (Modern) of #LMSParis! 🏆 Congratulations! 🥇 pic.twitter.com/nHfJs8DNYU

Over in Paris, the 497-player Grand Open Qualifier featured a wide variety of archetypes in the Top 8, as is typical for Modern. Ultimately, Daniele Frontuto took the trophy with Grixis Shadow. In the finals, he defeated Alejandro Dupuy de Lome's Living End deck, whose transformation into Rhinos post-board ingeniously dodged graveyard hate, yet left him without an answer to a pair of flying s.

"I've been playing for years", Fronuto said after his victory. "It's my pet deck; I love the deck. It feels great!"

Next week, I'll be back with a more in-depth look at the Modern developments since the release of Dominaria United. So far, it appears that the most important additions are to Goblins and to a variety of archetypes. answers the Grinding Breach combo, is easily castable for a single white mana, and fits into Four-color Omnath, Indomitable Creativity, Rhinos, Domain Zoo. All of these archetype names hyperlink to a top-performing Modern decklist featuring that earned a Regional Championship invitation last weekend.

This weekend, September 24–25, Arena Championship 1 will be held! It's the first edition of a thrice-yearly, 32-player event where competitors are facing off for $200,000 in cash prizes and Magic World Championship invitations. 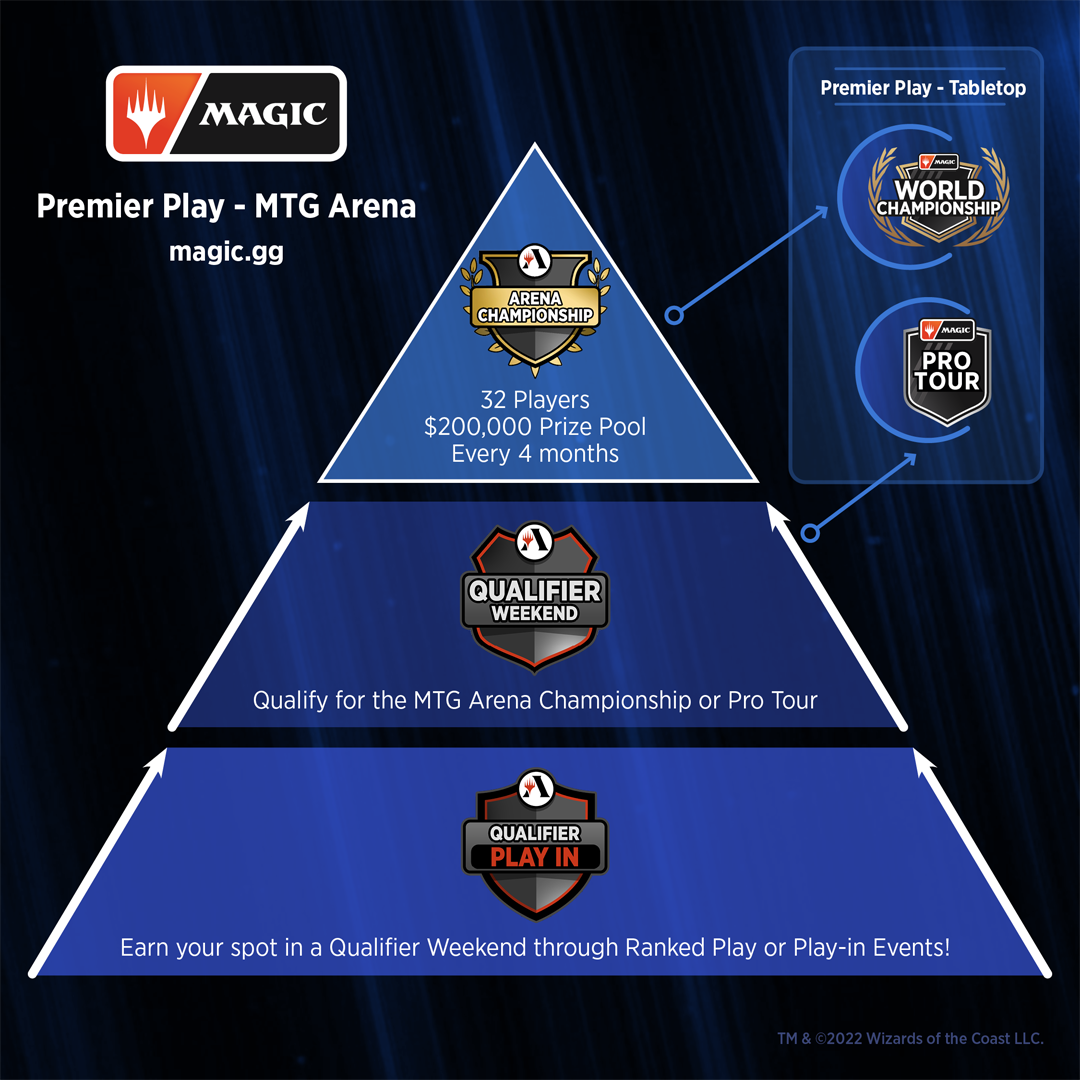 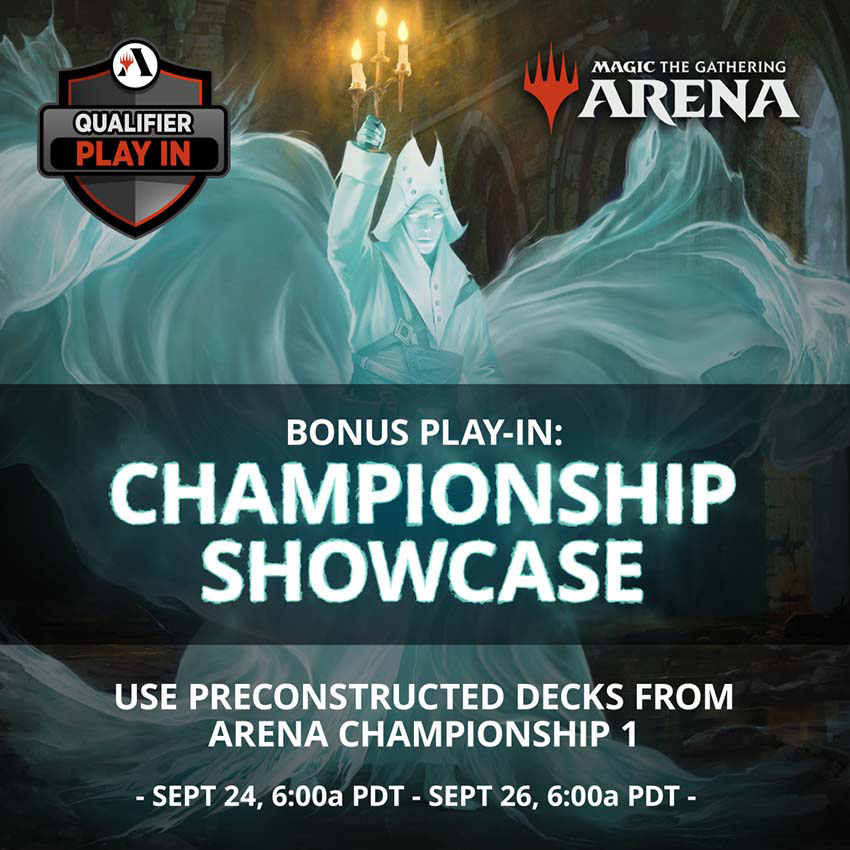 Arena Championship 1 will be streamed live beginning at 9 a.m. PT each day, September 24 and 25, at twitch.tv/magic. Day 1 leads off with Dominaria United Draft followed by three rounds of Alchemy Constructed. Day 2, which combines three more rounds of Swiss and the Top 8 playoff, is all Alchemy.

The metagame breakdown of the 32 Alchemy decklists submitted to Arena Championship 1 is described in the table below. Hyperlinks take you to a representative decklist on MTG Melee, but these will only become public after Arena Championship 1 gets underway. (If you use them before, you'll see an error message.)

You can see decklists without their sideboards now, and the complete decklists will be published on the Arena Championship 1 event page after the event gets underway.


The most-played cards overall, other than basic lands, are , , and . The lands are excellent fixing, and the 2/3 creature is a centerpiece in every Esper deck. Between its own connive ability; specialize creatures; ; and , Esper players are discarding cards frequently. This turns into a raw card advantage engine. Although there are many different ways to build Esper, ranging from aggro to midrange to control, is the defining three-drop in Alchemy right now.

Rebalanced cards are not a major factor in the metagame. From Standard-legal sets, the only rebalanced cards registered for this tournament are 17 copies of A-The Meathook Massacre and 1 copy of A-Hullbreaker Horror.

The most-played nonland cards from Dominaria United are ; ; and . So the main new additions to Alchemy are similar to Standard. Yet thanks to the power of , there are more Esper Midrange decks in Alchemy than Rakdos Midrange, Mono-Black Midrange, and Orzhov Midrange combined.

In addition, , , and are seeing considerable play as well. This is partly due to their synergies with Alchemy-specific cards. To explain deck compositions in more detail, let me to briefly summarize and introduce all the archetypes one-by-one.

Esper Midrange (8 players): Esper Midrange uses to keep the card advantage train rolling. The most common ways to generate value by discarding are the activated abilities on ; Lae'zel, Githyanki Warrior; and/or Viconia, Nightsinger's Disciple. In the meantime, you'll cast or to handle opposing threats. Combining efficient removal, powerful creatures, and the best ways to generate resource advantages, Esper Midrange is the prime midrange deck of the Alchemy format.

Domain Control (4 players): Domain Control uses various tri-lands to support , , , and . Featuring spot removal, sweepers, card draw, and sturdy win conditions, it's truly a control deck. Standard control players may take these Alchemy lists as inspiration, but they'll miss out on one sweet Alchemy-specific combo: on your own . This can put onto the battlefield as early as turn three.

Rakdos Sacrifice (4 players): Rakdos Sacrifice uses to turn the Blood tokens from and into a never-ending stream of Construct tokens and drains. Alchemy-specific tools include and .

Esper Aggro (3 players): Esper Aggro also uses , but what sets it apart from Esper Midrange is the creature count in the main deck: at least 26 creatures, most of which are party spells. The high creature count empowers Klement, Novice Acolyte, while the party spells enable . Thanks to disruptive party creatures like and Sigardian Evangel, Esper Aggro is the best at combining speed and interaction.

Rakdos Midrange (2 players): Rakdos Midrange has the best threats and answers in its colors across the mana curve. With on turn two, on turn three, on turn four, and on turn five, it can look close to a Standard deck. The main additions from Alchemy sets are and .

Jund Revels (2 players): Infinite loops with are gone. However, still allows you to ramp into heavy-hitters like . Moreover, will provide a lot of value, as this deck is filled to the brim with creatures. If you control as you cast , you might be lucky enough to seek or and dominate the battlefield.

Izzet Control (1 player): Izzet Control uses as many as 14 counterspells to say 'no' to whatever the opponent might attempt. After playing a bunch of these instants to buy time, you can win the game with a one-mana or with chained copies of .

Orzhov Midrange (1 player): Orzhov Midrange is capable of curving into , , , and . Requiring double white and quadruple black, the mana base is strained, but the spells are undeniably powerful.

Mono-Red Aggro (1 player): Mono-Red Aggro puts on a lot of pressure with early drops like and can finish off the opponent with burn spells. The deck contains a lot of cards from Alchemy sets, such as ; ; ; ; and Ambergris, Citadel Agent.

Selesnya Enchantments (1 player): Selesnya Enchantments is capable of massive turns fueled by . If you follow up the sorcery with or , you're guaranteed to draw at least two cards. reduces the cost of your enchantments, while and will be growing along the way. This results in a sweet engine, and it's all based around Standard-legal cards.

Esper Control (1 player): Esper Control also has the omnipresent , but it runs few creatures and is focused more on the long game. For example, by untapping with . Although the deck contains a tiny domain package in the form of and , its spells are limited to the Esper shard.

Domain Midrange (1 player): Domain Midrange is what you get when you start with an Esper Midrange deck and add , tri-lands, and . Since it contains but no or , it plays differently from Domain Control. It's exciting to see different competitive takes on the domain mechanic.

On the whole, the Alchemy metagame looks fun and diverse. It's based on Standard and black cards are popular, but all the new-to-digital cards provide additional depth. Don't miss the livestream of Arena Championship 1, which begins 9 a.m. PT each day, September 24 and 25, at twitch.tv/magic! More details can be found in the viewers guide.