Modern has undergone many changes over the past several months. But, in the end, it was a classic that won the event in the hands of Thoralf Severin, who assembled Tron on his way to a dramatic finals victory over Alvaro Fernandez Torres, who was seeking to win the Mythic Championship in his home country.

Here are the highlights from an exciting final day of competition.

Before this tournament, Severin had put together a strong career - entering this tournament he had three Top Finishes in the past six years - and his work on his Youtube series Arena Boys earned him plenty of fans cheering him on in Barcelona.

The most striking thing about Severin is just how amiable he is. Win or lose, turn 3 Tron or no Tron at all, he was quick with a smile and a laugh at the feature match. For someone who doesn't love being in the spotlight, he handled the pressure of the Mythic Championship admirably, and gained friends as well as match points as the tournament went on.

His Tron deck of choice was something of a throwback. As other players have begun aggressively branching out, from a resurgence of Eldrazi Tron to Mono-Blue Tron to experimenting with Karn, the Great Creator and a one-of sideboard, Tron has been evolving along with the format. But Severin and the rest of the German testing contingent realized something vital before the tournament - Against the decks they expected to show up designed to beat Hogaak, it was classic Tron that was best.

The strategy paid off perfectly, as Severin stayed near the top of the standings throughout most of the tournament. That streak continued in the Top 8, as he beat Jund twice in a row, an extremely good matchup for the Urza lands.

His finals matchup was not quite so lucky. Fernandez Torres was piloting Hardened Scales, an incredibly tricky, intricate and fast deck that could go around many of the haymakers from Tron. But Ulamog, the Ceaseless Hunger is the biggest haymaker of them all, and it came up clutch multiple times in the finals, including a key topdeck in the second game when it was Severin's only way to win the game.

Severin's deck continued to fire on all cylinders. He went up 2-0 quickly, and after losing a close game 3 navigated his way through a tricky game 4 in which he fell to just one life before winning.

His friends and teammates - including caster Riley Knight - were ready for the moment. 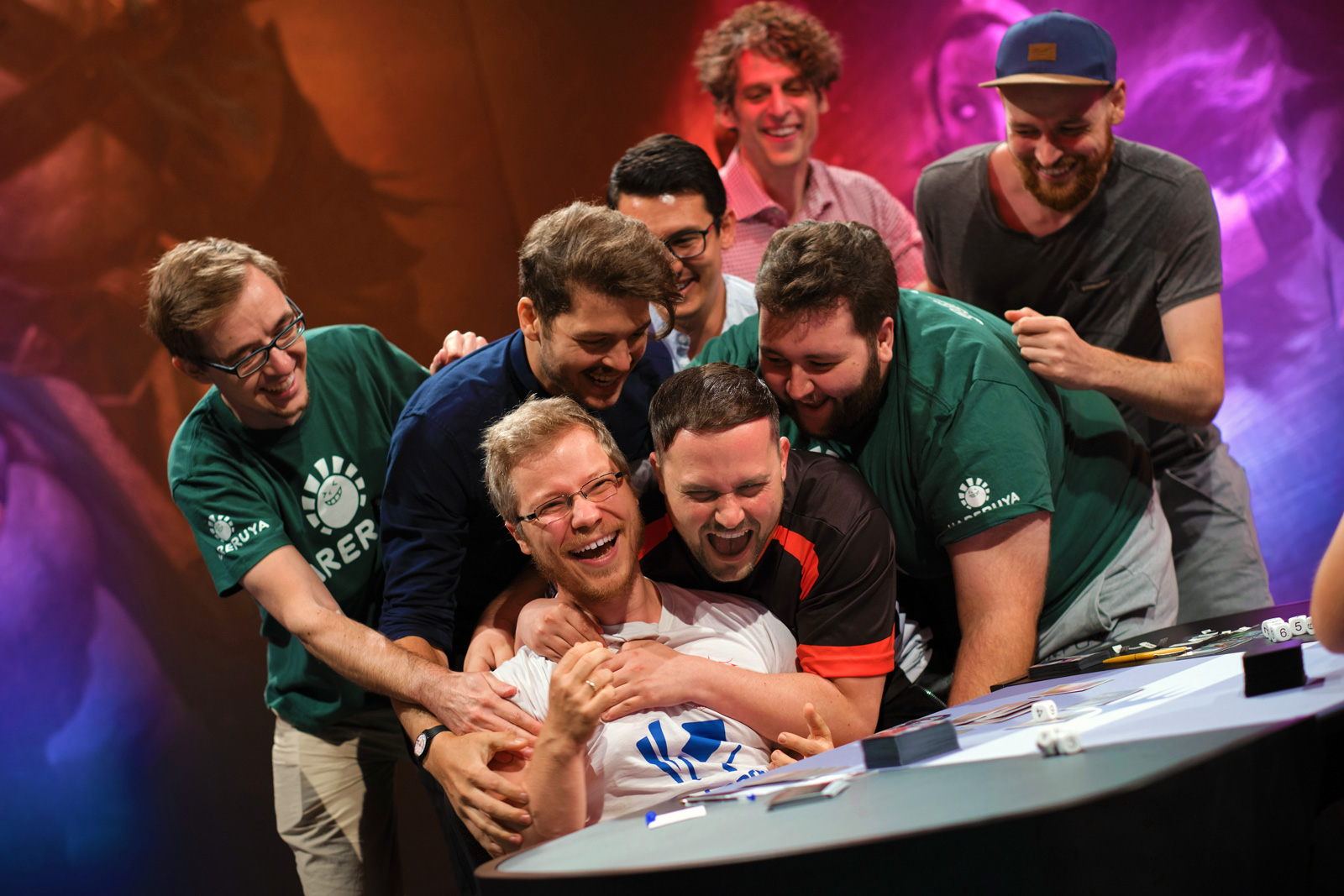 WE HAVE A WINNER!!!@ToffelMTG's friends wait backstage in the last tense moments of the finals at #MythicChampionshipIV, ready to CELEBRATE 🎉🎉🎉 pic.twitter.com/MYUbRb3Kz8

It was an incredible run for Severin, and he leaves Spain as a Mythic Champion! 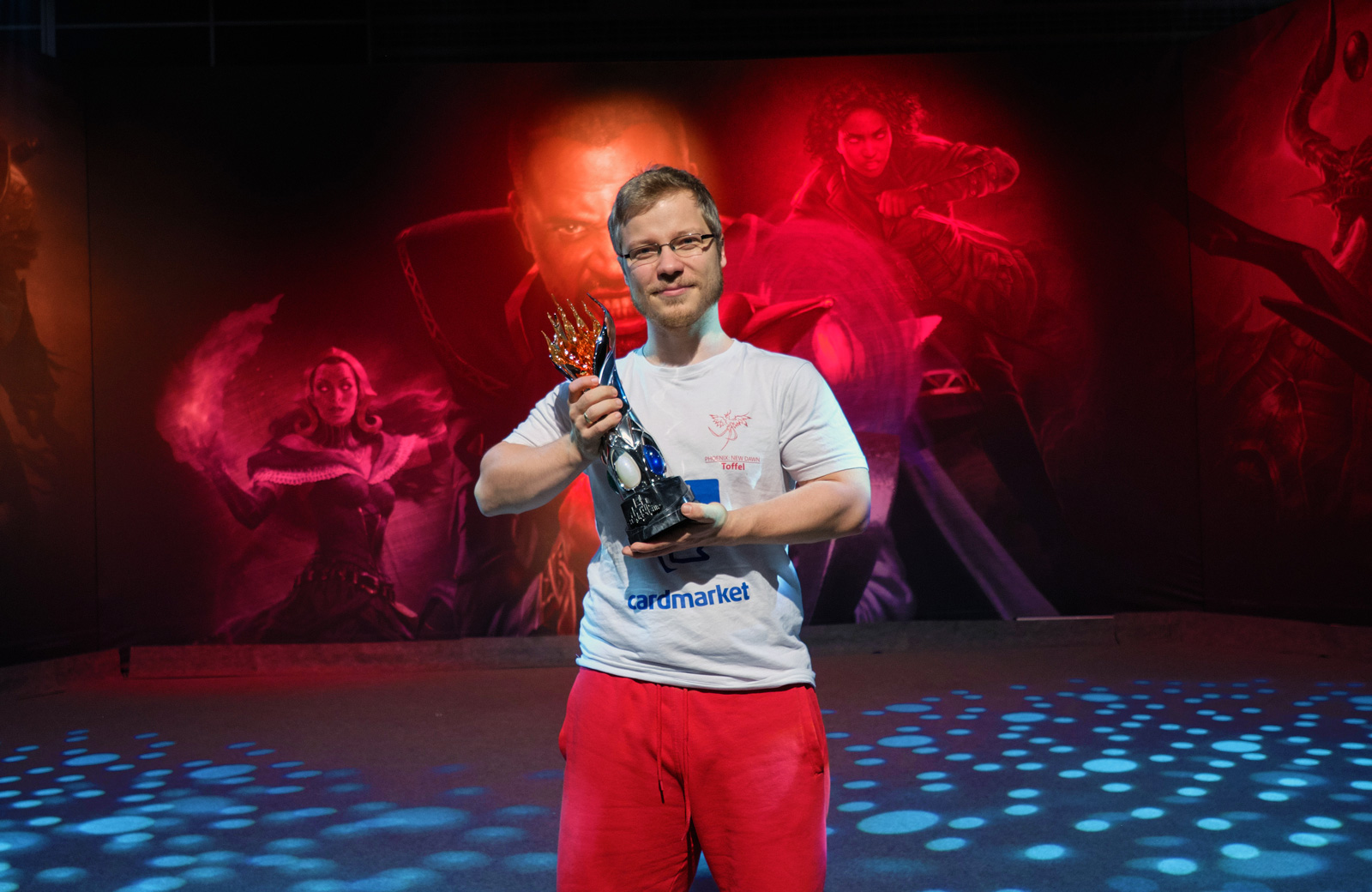 The Team Series entered its final tournament, and there was plenty on the line as players and teams jockeyed for a chance at the all-important top two spots and the chance to play for the team title later this year.

In the end, it was the reigning champions Team Ultimate Guard Pro Team who finished second, giving Andrew Cuneo, Reid Duke, Jon Finkel, William Jensen, Paul Rietzl, and Matt Sperling a chance to square off against Hareruya Sword for the title later this year.

Modern has become one of Magic's most-beloved formats in the eight years since its creation, and with several hugely impactful sets released recently the format has continued to evolve.

This weekend, it was Hogaak, Arisen Necropolis that reigned supreme, even after it lost Bridge from Below several weeks before the tournament. Whether it was in a Dredge shell or a dedicated deck that also featured Vengevine, Hogaak was the most dominant deck of the weekend, as Frank Karsten detailed here.

Even in a world where some people were playing Leyline of the Void in the main deck, the graveyard menace demonstrated its power. But players did come prepared - Hogaak put only one player into the Top 8, and the finals was between two decks that haven't undergone major changes in Mono-Green Tron and Hardened Scales.

It was the deciding Game 5 of the quarterfinal match between Zhiyang Zhang, playing Jund, and Manuel Lenz, on Urza ThopterSword. Zhang wasn't just on the back foot, he was very nearly almost certainly dead. Lenz had Urza, Lord High Artificer in play, plus a Teferi, Time Raveler, a Tezzeret, Agent of Bolas, and an Arcum's Astrolabe that Tezzeret had crafted into a 5/5 creature. Zhang had . . . nothing. Nothing but a handful of draw steps before he was dead.

But those draw steps provided, and Zhang picked off the planeswalkers and the creatures one by one. With only a single life point, the other side of the battlefield was finally clear of threats. A Scavenging Ooze came down and started to pad Zhang's life total and eat away at his opponent's, until, in just a few turns, it was Zhang locking up a quarterfinals victory.

WOWOWOW what a match! Zhiyang Zhang comes back from one life to win Game 5 of his quarterfinal!!!#MythicChampionshipIV pic.twitter.com/ySgicBqLnT

It was another close Game 5 in the quarterfinals, this time between Alvaro Fernandez Torres and Martin Muller. Torres was playing Hardened Scales, a rogue deck choice for this particular tournament, against Muller's Hogaak. While Torres' Hangarback Walker was an impressive 9/9, it couldn't do anything against Muller's even larger Carrion Feeder, and Muller was careful not to give Torres any opportunities to trade it in combat, knowing that a flock of thopters that large would be the end of him.

Torres, however, put his Nature's Claim to good use. With no target on Muller's side of the battlefield, he pointed it at his own Hangarback Walker to both pad his life total and create enough thopters to put the game away two turns later.

Next up is Mythic Championship V in Long Beach, California, on October 18-20. The tournament will be played on MTG Arena, and the members of the Magic Pro League will again face off against a set of challengers intent on joining Severin at the top of the Magic world.