Players Tour Online 3 is in the books, and what a look into the world of Standard it was. It gave us a novel breakthrough Orzhov Yorion deck, a reasonably diverse Top 8, and a worthy champion. In the end, it was William Craddock who triumphed with Jund Sacrifice, defeating Rei Hirayama and his Temur Reclamation deck in the finals.

A total of 151 Standard decklists—you can find all of them here—were submitted for Players Tour Online 3, with as the most-played non-land card. Adding up all the results from fifteen rounds of Swiss, here are the win rates (in non-draw, non-mirror, non-bye matches) of all archetypes with at least five pilots.


Although Growth Spiral decks performed better on Day 2 than on Day 1, they still underperformed in the event as a whole. By contrast, one deck had the highest win rate by far, and almost no one saw it coming.

The origin of this deck supposedly goes back to Pro Tour Kobe 2006 champion Jan-Moritz Merkel, who posted several LCQ Top 8 finishes with s and earlier this month. According to his friend and Hall of Famer Kai Budde, Merkel is "World's #1 Ravenous Rat fan. He's actually played in Constructed, so when he shows up with a discard heavy deck ... I'm quick to dismiss it."

But other players saw the potential, including Rivals league member Eric Froehlich. He had been working on decks with 4 Yorion already, and when he saw a copy of the list in a Magic Online Challenge, he thought a lot of the things from that list could attack the metagame in both a good and fun way. MPL member Brad Nelson jumped on board to help tune the deck, and Hall of Famers Seth Manfield and Ben Stark registered the "broken deck" as well.

Throughout the event, they drew in viewers with the power of and captivated them with / loops. By alternatingly blinking each other, this pair of creatures makes it possible to reuse the enters-the-battlefield abilities of such permanents as , , and turn after turn. Once the engine gets rolling, it's hard to beat.

Although Ben Stark fell in the quarterfinals and Seth Manfield narrowly missed in tenth place, they cemented Orzhov Yorion as a powerful new addition to the competitive Standard metagame, with particularly good matchups against Bant and Rakdos.

Early on in Day 2, the story was that Isaac Egan and Logan Nettles simply couldn't stop losing.


After Round 13, they were leading the standings in dominant fashion. At that point, Isaac Egan still had the pristine 13-0 record, while Logan Nettles at 12-1 had dropped only one match. The next competitor, at 10-3, was at least two losses behind!

In the end, both of their runs came to an anticlimactic end in the quarterfinals, but their early leads over the field were still memorable. 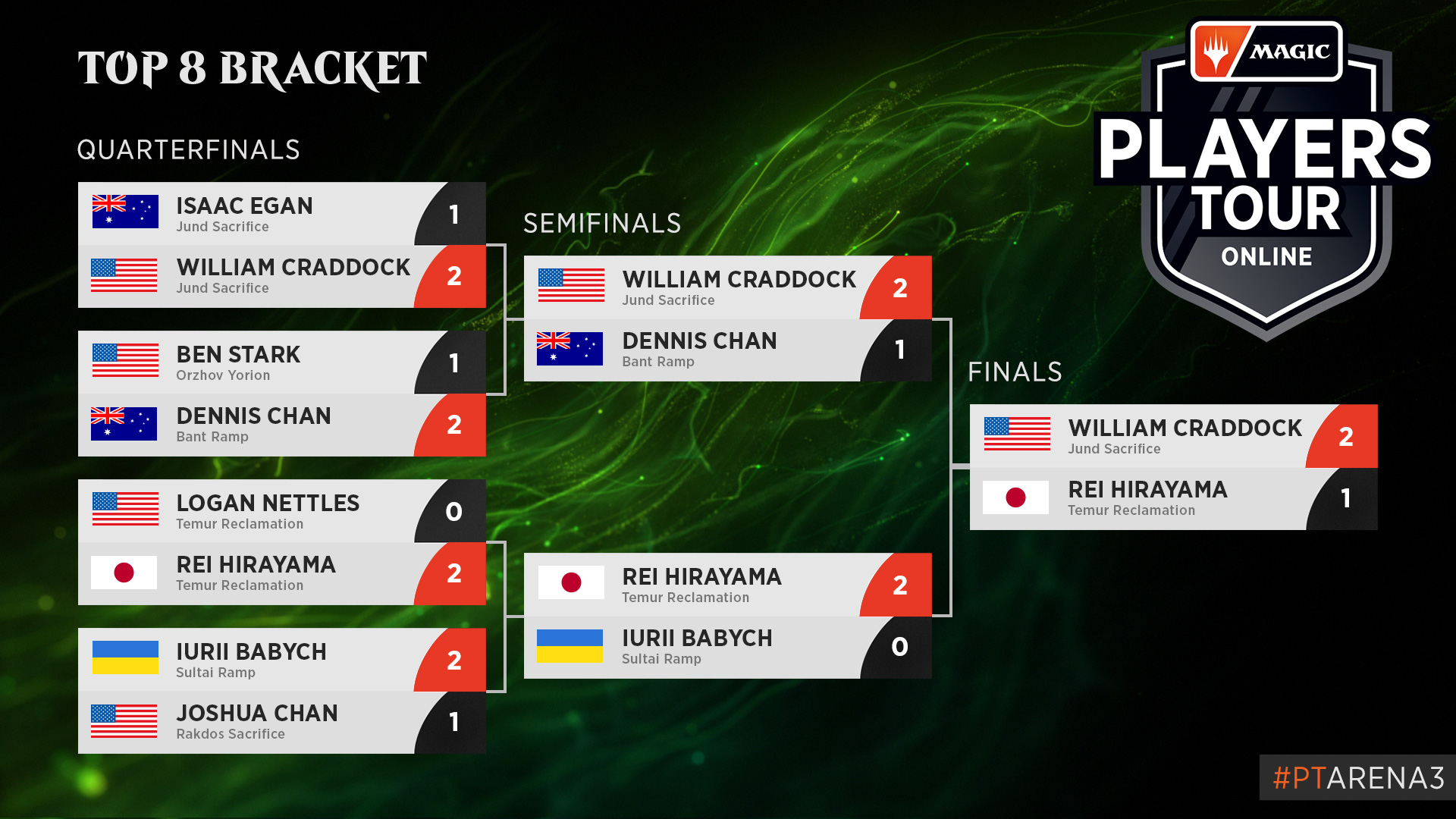 The Top 8 players were a mix of veterans and newcomers from the United States, Australia, Japan, and Ukraine. You can find the Top 8 player profiles here. All of the Top 8 players, as well as ninth-place finisher Yuta Takahashi, earned a qualification for the 2020 Players Tour Finals—a prestigious and more exclusive tournament with a $250,000 prize pool that will start on July 25. 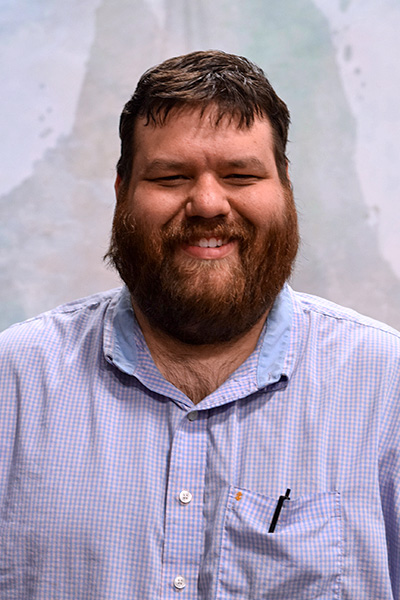 William Craddock, a self-described "on-and-off grinder" with two second-place finishes at recent Grand Prix, likes to go into tournaments "nearly ice cold." As he explained, "I feel my strength as a player involves learning on the fly and not convoluting my ideas of how certain matchups should play out beforehand ... I will play fairly sloppy early in tournaments, but after I hit my stride, I can play rather well. Historically, whenever I tested, I do worse."

That's not to say that he went in completely unprepared. For one, he works retail in a Magic shop and has his own online store, so he's always busy with Magic in some way. "I know the big decks in the meta, and I try to watch streams when I can. Most of my prep just comes from understanding how decks work. Every Standard has a deck similar to one in a previous Standard, and I've been playing for a long time, so most look the same to me."

Hence, after winning the last tabletop PTQ in his area to qualify for the Players Tour, the 33-year old from Edmond, Oklahoma didn't do a ton of playtesting. But he watched the evolution of the metagame and opted for Jund Sacrifice because he expected "Bant Ramp to be big in this tournament and I feel the matchup is good."

It worked out. After starting 6-3 on Day 1, learning his deck's intricacies on the fly, Craddock hit his stride. A 5-1 record on Day 2 which was enough to narrowly make the Top 8 in eighth place, and he didn't stop losing after. In the quarterfinals, he promptly ended Isaac Egan's dominating run. In the semifinals, he defeated Dennis Chan, who was playing the Bant Ramp deck he was gunning for.

All that remained was the finals, where he faced Rei Hirayama and his Temur Reclamation deck. Hirayama, the only Japanese player in the Top 8, called his performance "one of the greatest achievements in my life" and entered the final match in good spirits. "I'm feeling good and lucky ... If I win or even if I lose, I will go eat with my friends who helped me test for this tournament," he said.

After Game 1, it looked like Hirayama would be hosting a celebratory dinner in Tokyo, as Craddock did not have much pressure and, tired after a lengthy day, missed an important opportunity to tap mana manually.

To be fair, with in hand for Hirayama, it probably would not have mattered in the end, but it was still brutal. "I made a few more mistakes than I am used to," Craddock said after the tournament. "I feel a lot of things I did on Arena wouldn't happen on paper where I play a little slower."

But importantly, he did not let this get to him—he shrugged it off, immediately moved past it, and felt really confident with his sideboard plans. "I think the biggest difference between my sideboard and the few others I saw was mine was more transformational. I had a full 14 cards to bring in against Temur Rec which transformed my deck into aggressive beatdown. I just shaved all the attrition cards."

It worked like a charm. In Game 2, a pair of s came down early, and neither nor were an effective answer for Hirayama.

Game 3 was similar, also with s on turns three and four, but Hirayama was able to combine s and s to deal with them this time around. However, this left Hirayama low on resources, and an unanswered pair of s soon allowed Craddock to stride to victory.

"I know it's a small tournament, but finally winning [after multiple second-place Grand Prix finishes] feels incredible," he said afterwards. "Just means I am capable of succeeding in tournament Magic at a somewhat high level. I would probably yell, but it's 4 a.m. Shout out to my fiancé Deanna for staying up until 4 a.m. to support me!!"

With his first PT Top 8 and first premier event victory now under his belt, I asked Craddock if he would consider any larger Magic esports goals, such as getting to the MPL. "Definitely would like to take it to the next level," he answered. "I never really thought I could go as far as something as the MPL, but this might be a starting point. We will see."