The creation of the Magic Pro League sent shockwaves through the professional Magic world, and it pushed the level of competition at the top even higher. At the first Mythic Championship of the season in Cleveland, the public got their first chance to challenge the 32 members of the MPL. The result was an incredible victory by Autumn Burchett, the two-time English National Champion who can now add Mythic Champion to their list of accomplishments.

It was also a big weekend for MPL players, with Márcio Carvalho leading the way as he clinched his astounding sixth Top 8 appearance to go along with his three Grand Prix titles. So how did he pull off the feat? Well, for the Draft master, it came on the back of an undefeated 6-0 Limited finish. Players from around the world respect Carvalho as quite possibly the best Limited player in the world, and he demonstrated exactly why at the Mythic Championship as he pushed the boundaries of what was possible with Ravnica Allegiance Draft.

"In my second draft, I had the choice between Kaya's Wrath and Sharktocrab," he explained. "Kaya's Wrath is the better card, but I looked at the rest of the pack and saw the best cards after those two were also Orzhov, so I took the Crab and let the next three or four players fight over white and black."

Whether pros made it to the MPL by being a Limited master like Carvalho or by virtue of being the reigning Player of the Year, everyone knew there was something special about competing in the first of many Mythic Championships, be they in tabletop or digital form.

"I'm so excited preparing for the Invitational, I almost forgot there was a Mythic Championship in Cleveland," joked Carlos Romão. "The prize money is outrageous—it's life-changing money—and it's going to be a hell of a show." 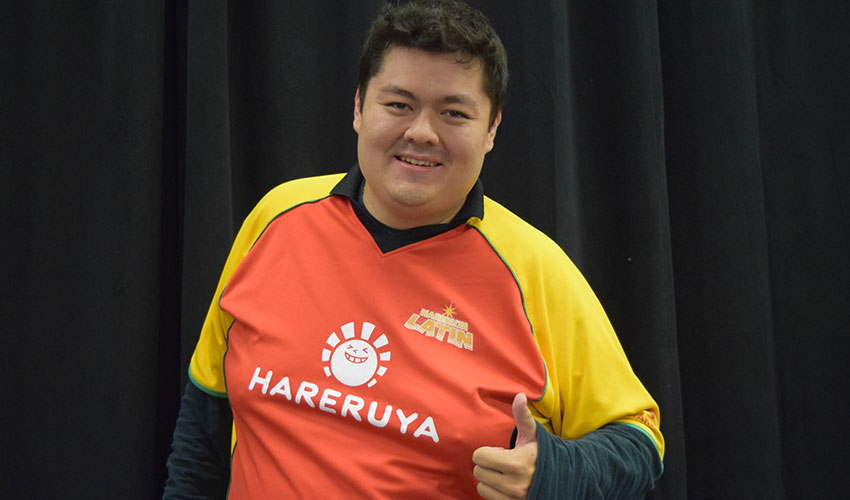 Romão could barely contain his excitement for the upcoming Mythic Invitational.

So, while the Invitational was on everyone's minds going into Cleveland, there was the business of a Mythic Championship to settle first. Carvalho's Top 8 run was matched only by what could be a career-defining Top 8 by Reid Duke. Long acknowledged as one of the best players in the world, it's been seen as a question of when—not if—he will join the Hall of Fame once eligible. But with three top-level Top 8s to his name, Duke was widely viewed as needing one more finish to give his resume a final padding.

Duke lost out to Burchett in the semifinals, but it was a monumental weekend for Duke, and one his supporters certainly enjoyed watching as well.

@ReidDuke got a beautiful draw from two young fans! (And I was there to take a photo 🌝) pic.twitter.com/9QwqXZ88QG

There were near-misses for several other MPL members. Andrea Mengucci posted a Top 16 finish, while Piotr Głogowski—the youngest member of the MPL at 23 years old—posted a strong Top 25 finish as well. Seth Manfield and Martin Jůza were the next best finishers, each turning in impressive 11-5 records that were good enough for 34th and 38th place, respectively.

Shota Yasooka, meanwhile, put the rest of the Magic Pro League on notice: he's not afraid to shake things up. The noted control master has put together a Hall of Fame career perfecting control decks, but he arrived in Ohio with a deck registering thirteen basic Mountains and four Ghitu Lavarunners. And in typical Shota fashion, he just kept on winning despite venturing outside his comfort zone and finished with a 10-6 record to end in 62nd place out of nearly 500 players. Andrew Cuneo, Owen Turtenwald, and Javier Dominguez each matched that record.

Not everyone found the same level of success—you can read about Brian Braun-Duin's fateful decision here—but as the first Mythic Championship wound down, everyone was excited about the new world that began in Cleveland and will take its next step at PAX East on March 28–31.