The Pro Tour is back, and for thousands of competitors across the world the path there continues this weekend at a Regional Championship.

As competitive play returns to tabletop, the stage is reset in a way almost never seen before in Magic's 30-year history of pro play. There are still plenty of legends in their own right playing the game at the highest levels, but there's no denying that the door is open more than ever before for someone to looking to make their mark on the rejuvenated competitive Magic scene.

For months, players have been hitting the tournament circuit, going from store to store to secure an invitation for the Regional Championship, and a six-week stretch of the best competitors Magic has to offer is about to begin across the globe. That begins with a four-continent kickoff this weekend as players across North and South America, Europe and Asia hit the ground running in our first Regional Championship weekend.

You can find full details (as well as a snapshot of the Pioneer metagame) in Frank Karsten's column this week.

The last couple of years have been interesting, to say the least, when it comes to covering competitive Magic. From the introduction of MTG Arena to learning how to make coverage happen in a fully remote world, add in the rotation of the game's top players and teams in that time and you have a world where the previous things I took to be true no longer held up. Grand Prix Top 8s? Still a useful metric, except for the hundreds of players who have made their way up the competitive ranks entirely in a time of online play. MTG Arena lifetime win percentages? How useful is that when you're talking about a proven Hall of Famer?

Without the ins and outs of the weekly grind, fewer events have come to mean more. And even with that we've seen a consistent stream of the new best in the world demonstrate one part of Magic that has always been – and I suspect always will be – true.

One event can change a life.

That's what's on the line when we talk about the Regional Championships to follow, and those are the stories we'll be looking to tell. These aren't just one-off events that award a trophy and some cash – the top players from each Regional Championship will earn themselves an invitation to the first Pro Tour of 2023, taking place February 17-19, 2023 at MagicCon: Philadelphia. For some future champion out there, their path to the top of the Pro Tour begins now. Not to mention that there's even more on the line here – some of the very best finishers will also punch their ticket to the next Magic World Championship.

What to Watch For

All of which means that for many players these are the biggest events to hit the tournament circuit in years. And at least one burgeoning chef moonlighting as a Magic champion is treating the Regional Championship in Sofia, Bulgaria with all the attention it deserves.

On my way to Sofia with @PivoUlivo to join the rest of the testing house for the Regional Championship. Excited for this week! 🤩 🇧🇬 pic.twitter.com/hTqSSWmcIB

With the return of the Pro Tour, it only makes sense that someone would resurrect the pro testing house. An age-old tradition that faced a pause during the pandemic is back at the Regional Championships courtesy of ringleader (and Mythic Invitational winner) Andrea Mengucci. Historically, Pro Tours would fall quickly after the release of the latest Standard set, and over the years the biggest teams figured out the best way to get ahead of the field was to lock themselves in a house with the best testing teammates they could find, emerging from seclusion two weeks later with the next format-breaking deck.

And plenty of that happened. But along the way, the testing house experience became more than just a data crunch: it was a rite of passage in the competitive Magic world, and the place where players made some of their most enduring memories whether the process yielded the next Caw-Blade or the tournament's worst deck.

So with the Regional Championship once again bringing together most of the best players across Europe, Mengucci joined forces with former World Champion Javier Dominguez and Portuguese legend Márcio Carvalho to bring things back in style. 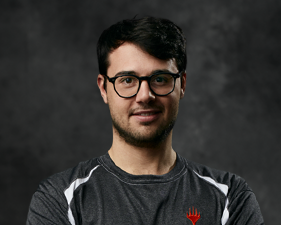 "We wanted to live the old glory days again and treat this like a true Pro Tour," Mengucci explained. "We've had it. I was able to bring in new people, including my friends Marco del Pivo and Tian fa Mun, who have never lived this experience before and I knew could bring a lot to the team," he said. "Testing has been amazing; I love discovering new things. But walking 30 minutes in the wood in the rain in November wasn't as good!"

For the dozen or so members of the Sofia testing house, that memory will blend in with the hundreds of games of Pioneer they're playing right now, right in between Mono-Green Devotion and the latest serving of #MenguCuisine.

Baccalà con patate. A very traditional way to cook cod, reminds me of both my granmothers. 😊 #menguccicuisine 🇮🇹 pic.twitter.com/Nuu07dqGdx

For Mengucci, it's all part of the experience. And as someone who has accomplished so much in Magic – he's won the World Magic Cup, the million-dollar Mythic Invitational, and posted seven Top Finishes in all – it's a return to the experience of the Pro Tour gathering that drives him in Magic right now. Since his incredible run that culminated in an Invitational victory, Mengucci has shifted his focus more to his true passion in Magic: content creation. His articles, "veedeos" and Twitch stream are can't-miss events every week, and he's maintained that success while remaining a world-class competitor at the same time. And with the Pro Tour on the horizon, the Italian is ready to tick a few more boxes off in his illustrious career.

"I hope to qualify for all of the Pro Tours in 2023, but really my true goal is to make it to the [Magic] Hall of Fame," he admitted. "I've been focusing more on work and less on competitive Magic, but I've been waiting for Wizards to bring it back after stopping nominations in 2019."

That motivation has led Mengucci to great heights before, and this weekend could be the first step toward the next milestone. One event can change the course of a career – or kickstart one to ever-greater heights. And with a new wave of players he's showing the ropes to, Mengucci is enjoying the ride.

Me and @TianMun ordered too much food but we have to finish every single bite of it! 😅 #menguccicuisine 🇧🇬 pic.twitter.com/qqwSjm5RHd

Today we did a long tournament in our Testing House, and you can see from the faces who won and who lost. 😂 Team Latinos very strong! 💪 🇮🇹 🇪🇸 🇵🇹 pic.twitter.com/C7JJSPnVzO

All Eyes on Atlanta, Sofia

While the Regional Championships are the most visible event in years for every region's top players, the next six weeks will also be an extremely interesting stress test of Pioneer. The public consensus of those like Mengucci who are deep in testing for the event is a resulting… shrug.

That raises the stakes even higher for the first weekend of events, when players will square off across four countries and several Twitch broadcasts. It begins with Sofia, which will be streamed at Twitch.tv/legacyeuropeantour. The commentators are Matej Zatlkaj, TheWillHallExp, Filipa Carola, and HarryMTG. Soon after, coverage will begin in Atlanta.

That's a lot of eyes on a relatively unexplored format still finding its footing. Mono-Green Devotion is undoubtedly the leader in the clubhouse but, by all accounts it's got some weaknesses that players will be aiming to exploit. And how things play out this first weekend is sure to impact things in the weeks ahead, as we look toward large Championship events in Canada and Japan, among others, next week. Looming over it all is the release of The Brothers War, which is sure to throw a wrench into the format and send players inside testing houses across the world up the wall as they try get an edge on the competition.

Awake at 5.40 AM in the last day of testing for RC. Too many ideas and need much more practice. I feel unprepared this time.

The more things change, the more they stay the same. And with the Pro Tour back and the Regional Championships kicking things off in earnest, I couldn't be more excited for it. And some things will never change, no matter how many thousands of games get played in testing houses.

The first cycle of Regional Championships kicks off this weekend & qualifies players for Pro Tour Philadelphia in 2023!