Ready to play some Magic with Phyrexia: All WIll Be One? From friendly to competitive you're in the right place! Below you'll find a compleat listing of play popportunites from your local Wizards Play Network (WPN) game stores all the way up to the big MagicCon: Philadelphia celebration.

Prerelease is traditionally supported with a Prerelease Pack that contains everything you need to play:

For this round, Phyrexia: All Will Be One adds a special twist if you're one of the fortunate few to find a truly compleat Prerelease Pack, as 1 in 15 features a Phyrexian language Spindown life counter which are beautful to see!

Playing in a Prerelease is easy. Just head on down to your WPN-affiliated local game store, pick up a Prerelease Pack after entering, and then build a deck for a few rounds of games.

Most stores will offer events in a traditional tournament structure with prizes that scale based on performance. Some may also offer a more streamlined build-and-play option, where you build a deck, play, and simply enjoy the new Magic cards, so check with your local stores for all the details.

New to the game, and not sure if you want to dive into Sealed? Phyrexia: All Will Be One Jumpstart Boosters offer an alternative way to engage with Prerelease. All you need are two Jumpstart Boosters, then just open them, shuffle up, and you're ready to play!

Players who do play in an event at their local store may also be able to obtain promo cards celebrating Magic's 30th anniversary, featuring iconic cards selected from 2000-2003. 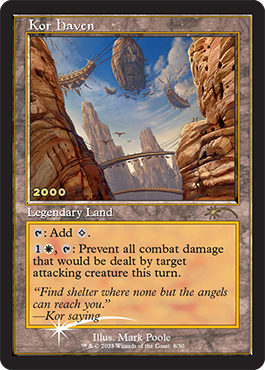 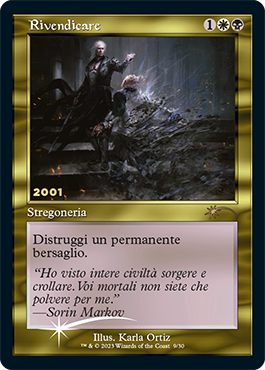 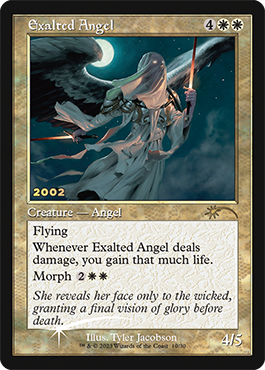 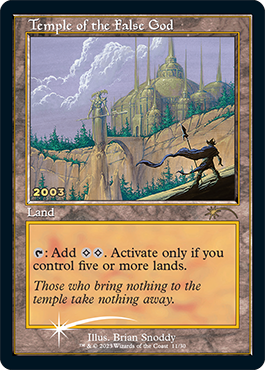 Temple of the False God

Note that Kor Haven and Vindicate are rarer 30th anniversary promos than others, and availability for all promos are limited. These may even be used as special prizes, so check with your local store for details.

Can't commit to a compleat day of Prerelease pack in-store? No problem. Stores may also offer Prerelease Packs for an at home experience. Additionally, WPN game stores have other Phyrexia: All Will Be One products available beginning with Prerelease (ahead of release on Friday, February 10). Whether you're joining the Prerelease celebrations, looking for Draft Boosters to battle with friends, or picking up Set Boosters to open at home, the Prerelease events beginning February 3 is where it all starts.

Want a little more fun after Prerelease? Head on in to your local game store for a Launch Party event! These events are a formal celebration of the global release of the brand new set, and a great time to play with your local community no matter the format you and your local players prefer.

Philadelphia is your cannot-miss destination a week after release, as the city of brotherly love is playing host to MagicCon: Philadelphia, the first of four big 2023 convention celebrations of Magic run in partnership with ReedPop!

MagicCon will also play host to the aptly named Pro Tour Phyrexia, fittingly the first Magic: The Gathering Pro Tour to take place since its revival was announced last year. At Pro Tour Phyrexia, a few hundred of the world's very best Magic: The Gathering players will compete in a three-day tournament featuring a whopping $500,000 prize pool. The formats are Phyrexia: All Will Be One Booster Draft in the morning of Friday and Saturday, and then Pioneer Constructed for five rounds afterward each of those days. Pioneer is also the Top 8 format on Sunday as the final remaining players compete to see who will take home the title.

The invited players who participate in Pro Tour Phyrexia will get a special Jace, the Mind Sculptor Secret Lair Prize Card simply for making it that far in non-foil, while the Top 16 finishers in the event will also take home a foil version.

For the competitive player looking for an opportunity to show their skills, MagicCon: Philadelphia will also host Pro Tour Qualifiers (which qualify top finishers for the next Pro Tour at MagicCon: Minneapolis) as well as the Secret Lair Showdown where players receive a Secret Lair promo simply for participating and compete for some coveted Secret Lair Prize Cards, including an alternate-art Ragavan, Nimble Pilferer and a very special variant on Brainstorm. 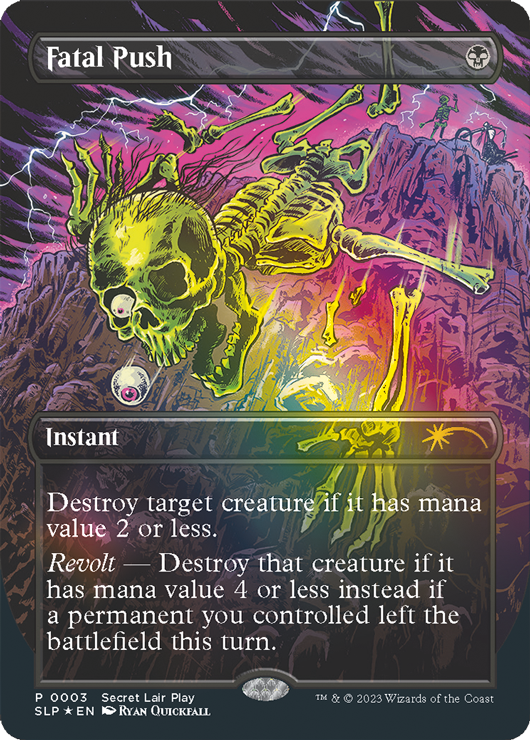 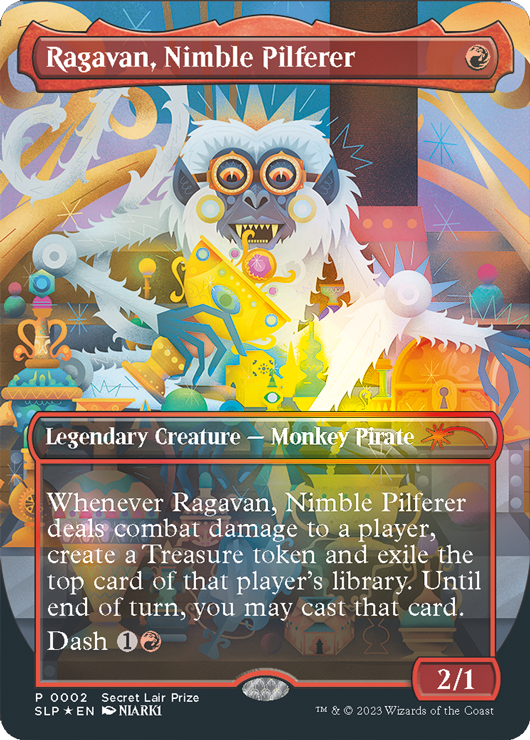 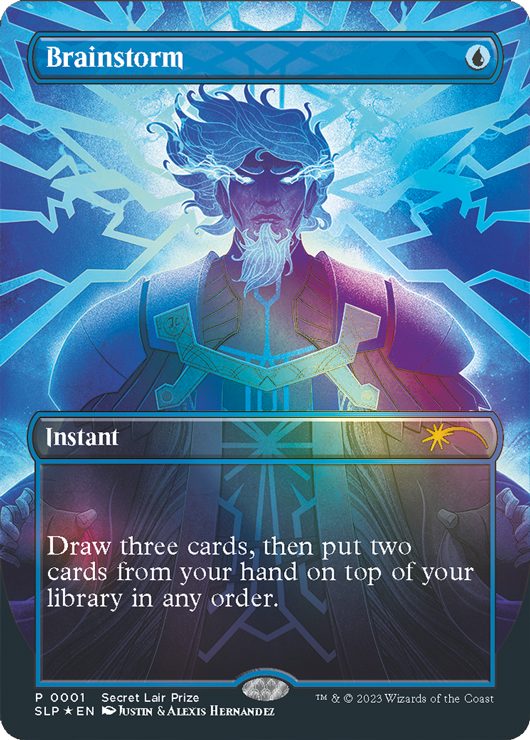 Tickets are still available, but as we get closer to the big weekend, they might not be, so don't delay if you want to attend and book today!

Looking for a local tournament to test out some new strategies? Are you interested in being your local champ? Perhaps you're new to competitive Magic, and are looking for practice and chances to level your skill up?

If so then the Store Championship is for you, and every WPN game store can run one!

This promo-supported program ensures WPN stores have some participation, Top 8, and winner promo cards to support a local tournament for their community. WPN Premium stores get a little extra touch, as the top 8 and winner cards will feature their store's name emblazoned on each of their promos so that recipients have some extra bragging rights on just where they top finished or even won their store championship.

For this round, the Store Championship is now going to follow a prescriptive format offering, of which stores will choose from, that their event can be run as. For the ONE Store Championship, the options are Pioneer Constructed or a Limited (Sealed or Booster Draft) format featuring Phyrexia: All Will Be One draft boosters, more closely following the format of the Pro Tour that this event follows.

Participants (while supplies last) will receive this alternate version of Annex Sentry from the new set: 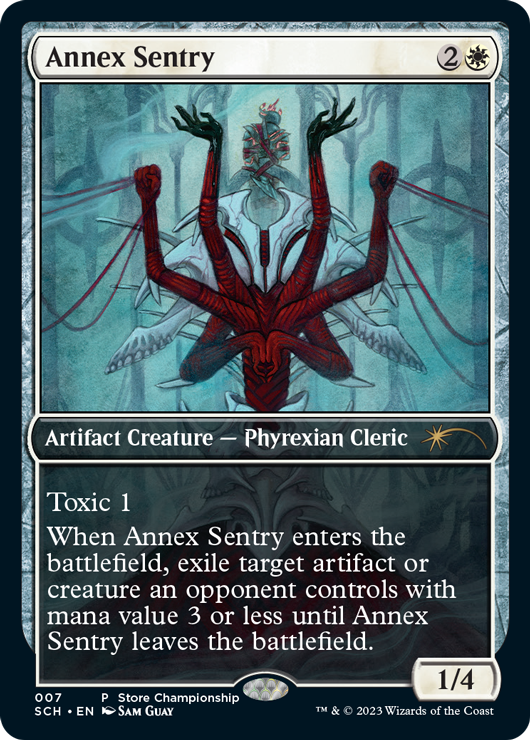 Finishing in the Top 8 of your Store Championship earns you a sweet new variant of Memory Deluge: 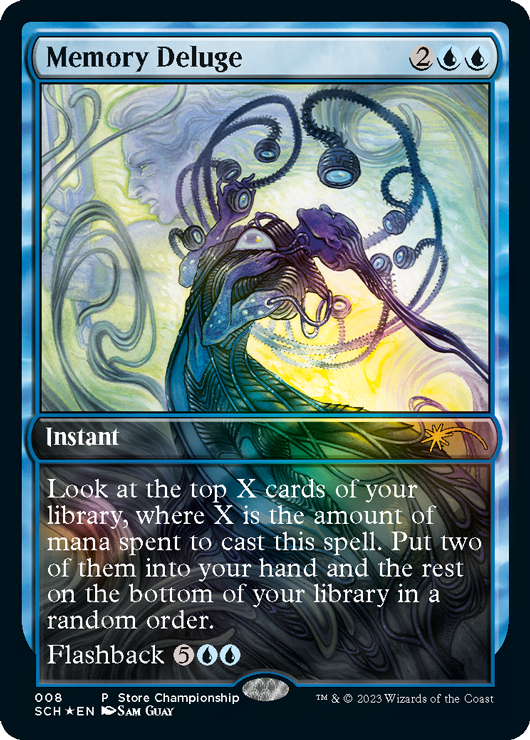 Win the whole event, and you'll not only be able to say you're the store's champion, but you'll also take home a special Koth, Fire of Resistance winner card: 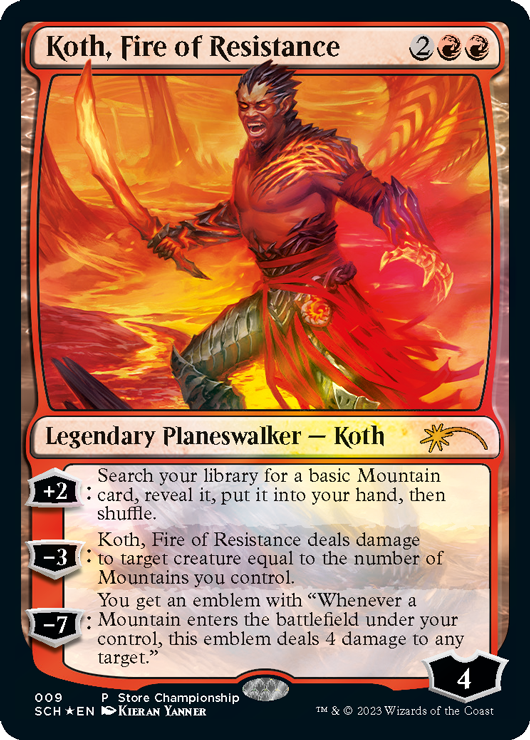 Commander Party's back, and it's a compleat experience ready for you!

Well no, it actually isn't, that's just on-theme phrasing, but it's close to complete for the current story arc, and Phyrexia: All Will Be One sets the stage for concluding story resolutions with March of the Machine in a few months. This WPN Premium-exclusive event lets Premium retailers host an exciting party for Commander players to enjoy during the weekend. Retailers who ran a Dominaria United and The Brothers' War Commander Party also get to continue the development of their game-altering adventure, with exciting moments to unfold that can be different from store-to-store.

Players who participate will be able to use a faction card that will add some exciting shifts to their typical Commander game, and Phyrexia has a few of those...five, to be precise, which will make this exciting riff on typical Commander play one that participants may want to revisit a few times this season.

On top of all that, participating players will also get a Phyrexian-language Norn's Annex simply for playing in one. 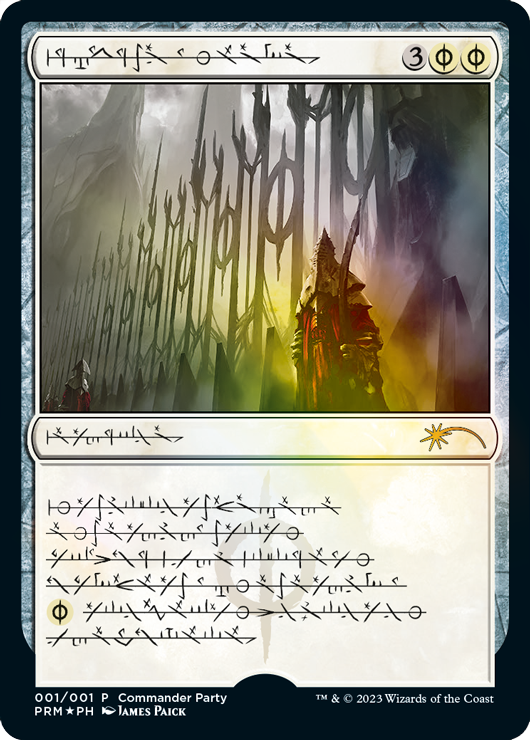 Pick a praetor, align yourself to their faction, compleat your Commander strategies, and get ready for a good time at ONE's Commander Party at a WPN Premium store near you!

No week is truly compleat without enjoying a Friday night out with your friends at a Friday Night Magic (FNM for short), a longstanding weekly event that is...anything your store wants to run for their local players! FNM is very open, can be casual, can be competitive, it's up to what local players in your area enjoy and what your store wants to run.

FNM takes place—well you guessed it—every Friday. WPN stores receive WPN Promo Packs to support their events with prizes. While these can be used across different events, tournaments, and the like, FNM is a typical place where you'll see them rewarded. Aside from featuring some goodies such as rare and mythic cards from a curated list and a code for a Magic: The Gathering Arena booster pack redeemable via the in-game shop, these packs also include one of an assortment of dark-frame promos. The selects for ONE you'll see featured below: 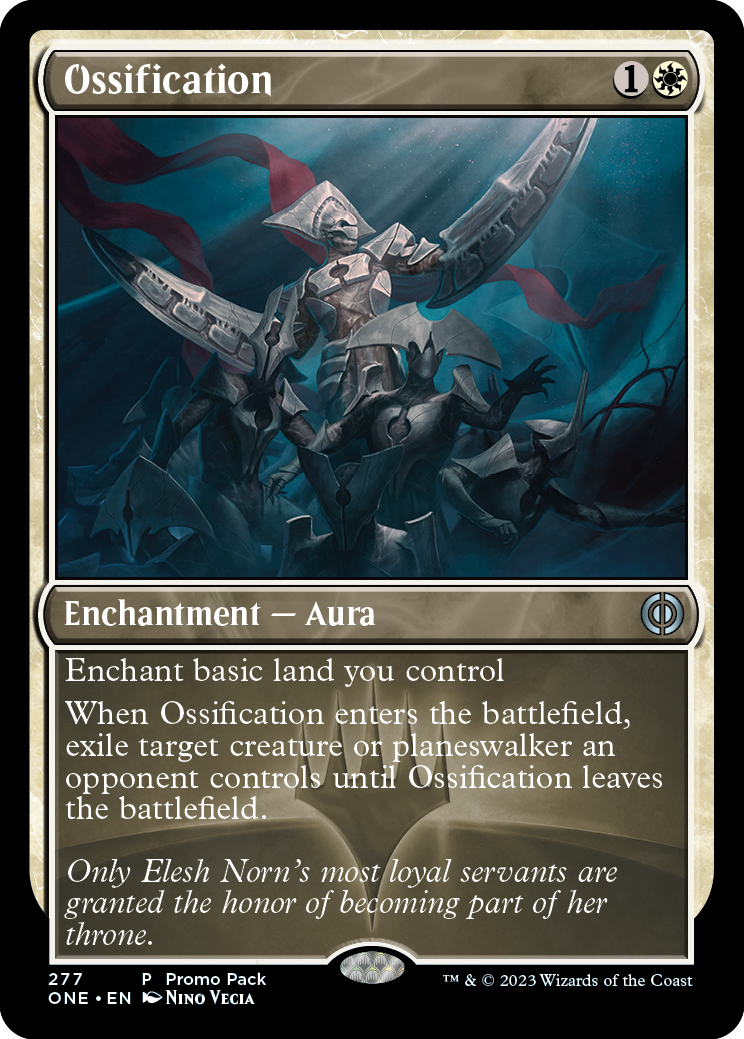 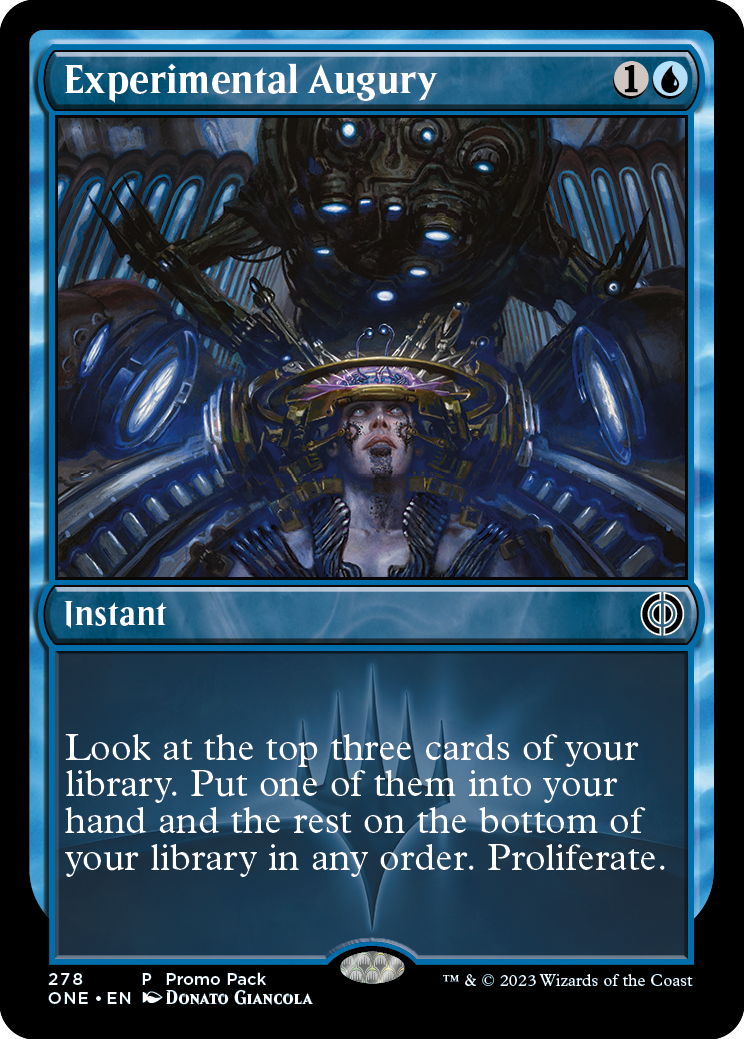 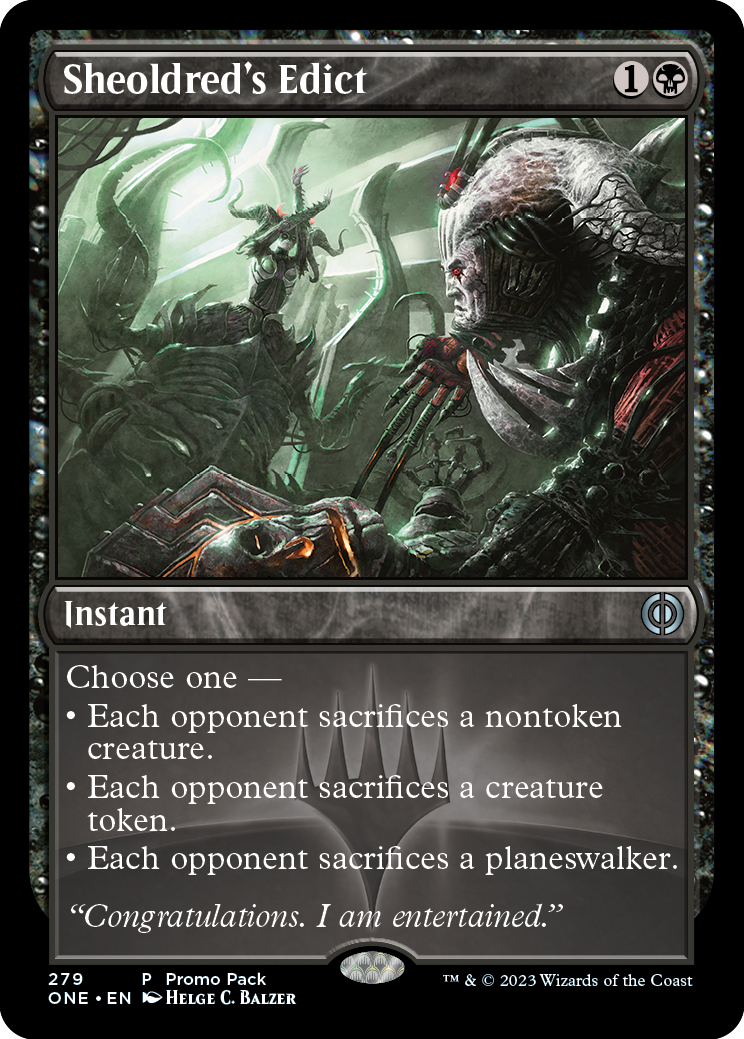 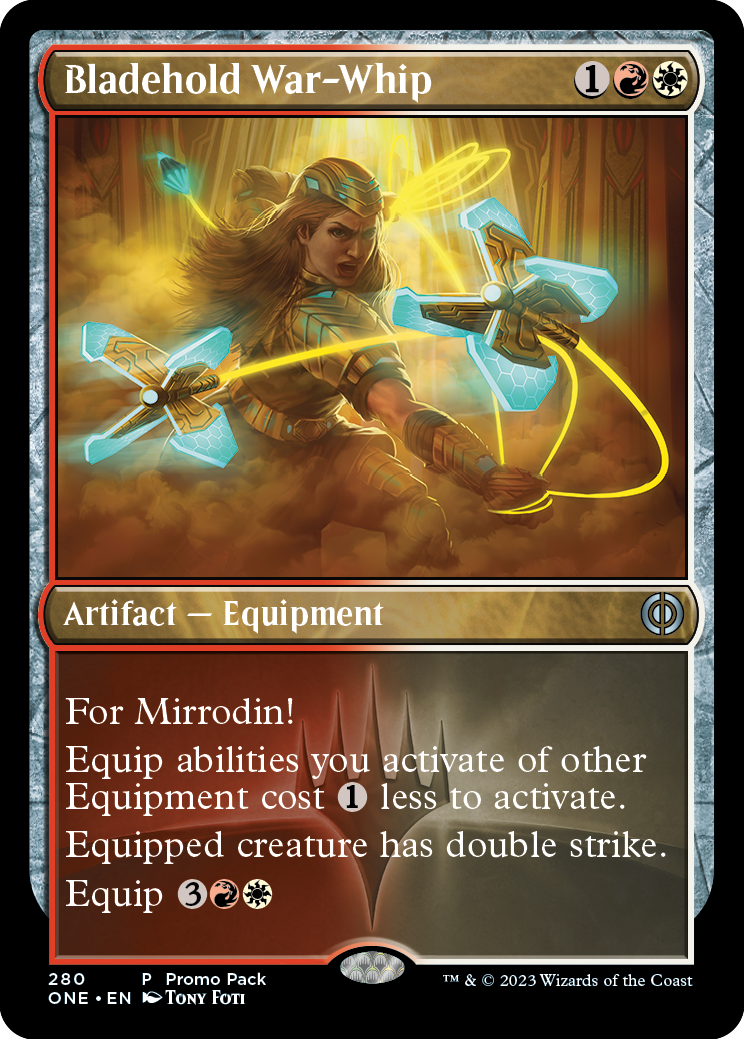 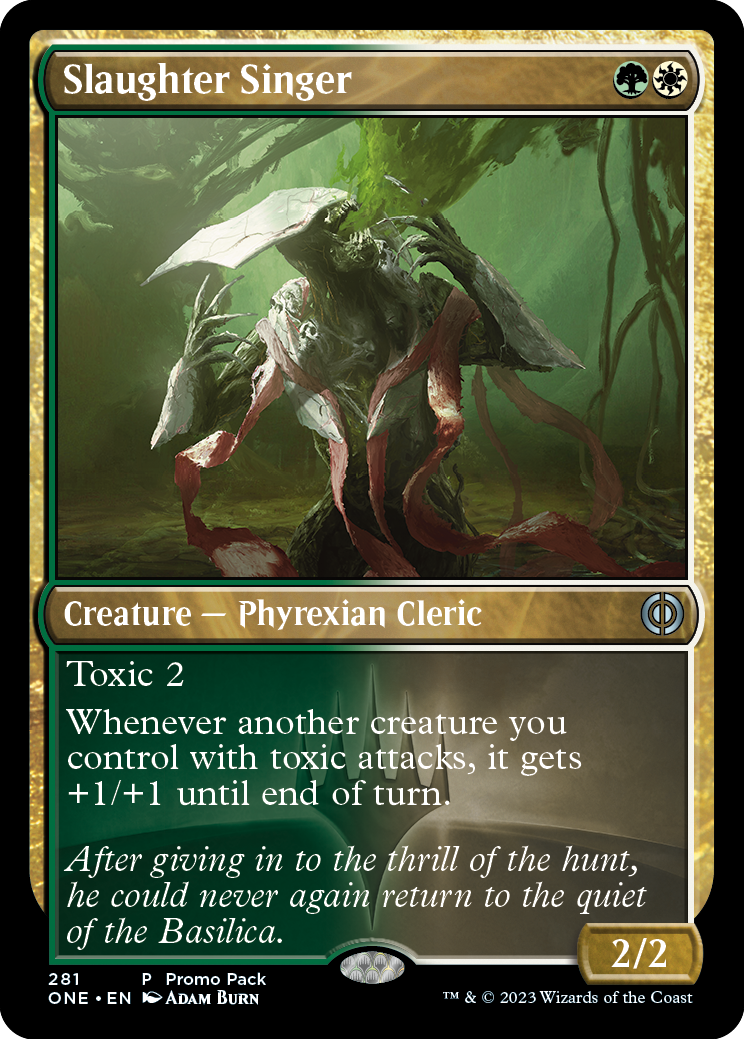 Looking for a night of Commander? Well then, Commander Nights if your best bet. Every WPN store can run these, and much like Friday Night Magic, they are also supported with WPN Promo Packs as prizes, as well as whatever your local store wants to add to it or use instead of those.

That's a whole lot of excitement at your local game store, but the fun doesn't stop there.

The second round of Regional Championships since we announced the return of the Pro Tour take place starting February 25 and run until April 9. These events qualify top finishers from each region to the second Pro Tour of 2023, taking place May 5–7 as part of MagicCon: Minneapolis. Winners in each Regional Championship also qualify for the Magic: The Gathering World Championship, allowing regional champions to show everyone their skills on the global stage later this year.

When your region's championship event takes place will differ from region-to-region, so here's a round-up of when those are happening based on the region you reside in.

Participants in the Regional Championship for this round will receive a non-foil Gideon, Ally of Zendikar promo card. 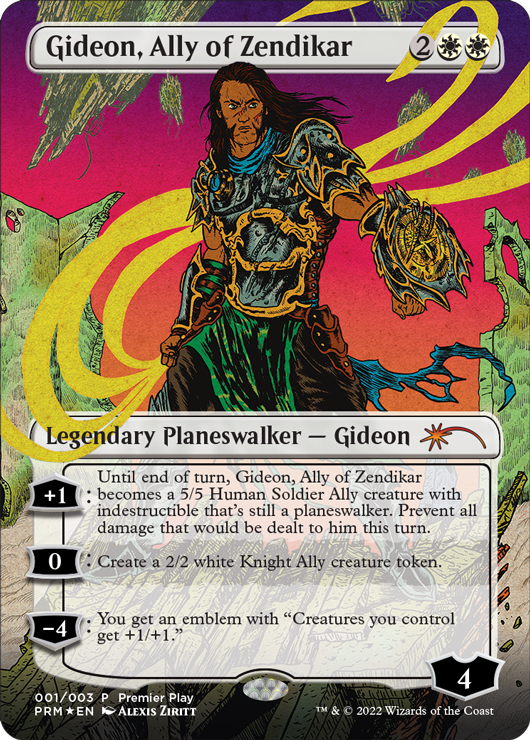 Top finishers in the Regional Championship will receive a foil copy of the Gideon as well! 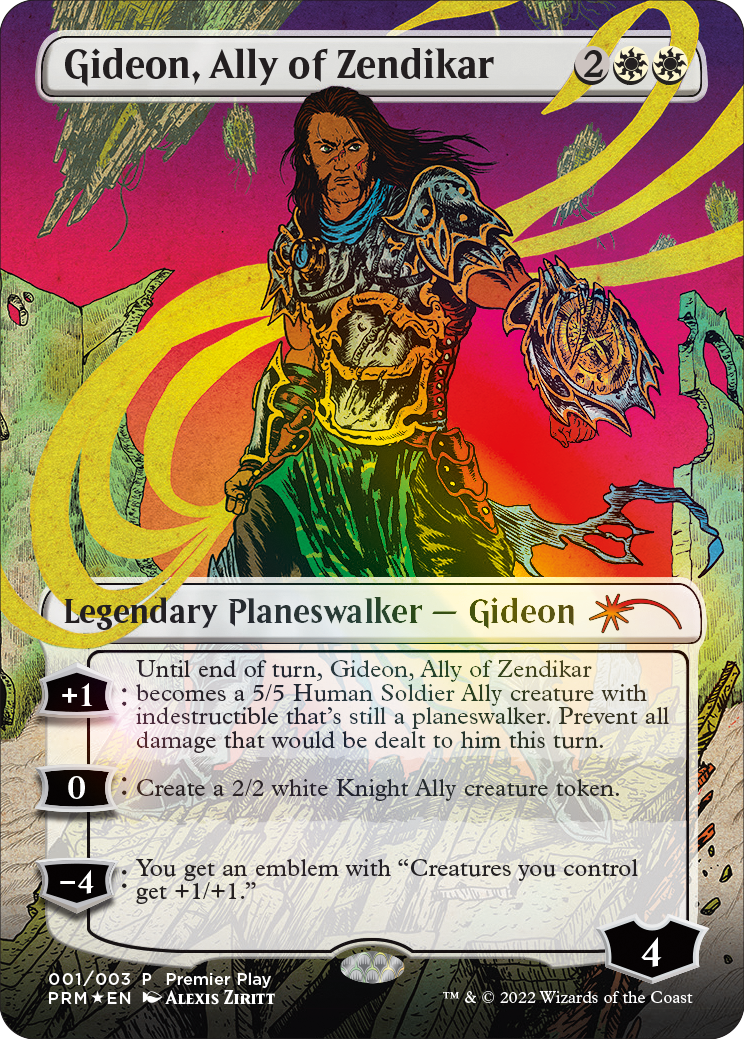 These events also have additional prizes, including prize money. The prize pool for each Regional Championship will differ in each region, so check your region's organizer website for more info on the prize schedule.

Regional Championships are invitation-only events, but organizers will typically host Last Chance Qualifiers for those looking for one final shot at playing in the main event.

Even if you aren't qualified, organizers will typically offer plenty of things to do if you want to watch, support friends, or play in some side events, including for Commander players who just want to attend and game. While the Regional Championship is a focused competitive tournament qualifying for the Pro Tour and the Magic World Championship, there's a lot to do if you aren't qualified—or if you simply want to enjoy a weekend, cheer on some friends, or make some new ones.

Regional Championships are a place for everyone that loves competitive Magic to gather!

Still looking to qualify for the Regional Championships? Well, now through April 2 is the time to do so if you want a shot at the Pro Tour in 2023!

Participants in qualifiers right now get a Mystical Dispute promo. 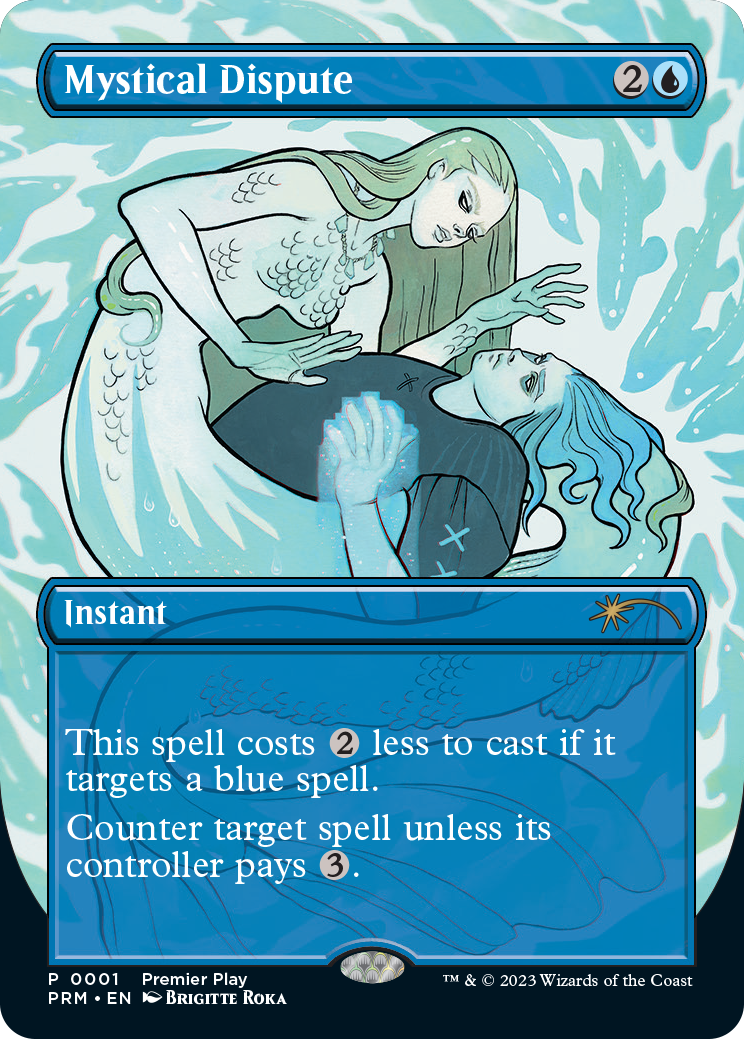 Top finishers in qualifiers right now get a Thing in the Ice/Awoken Horror promo, with those earning invitations to the Regional Championship also snagging a cute-scary foil version. 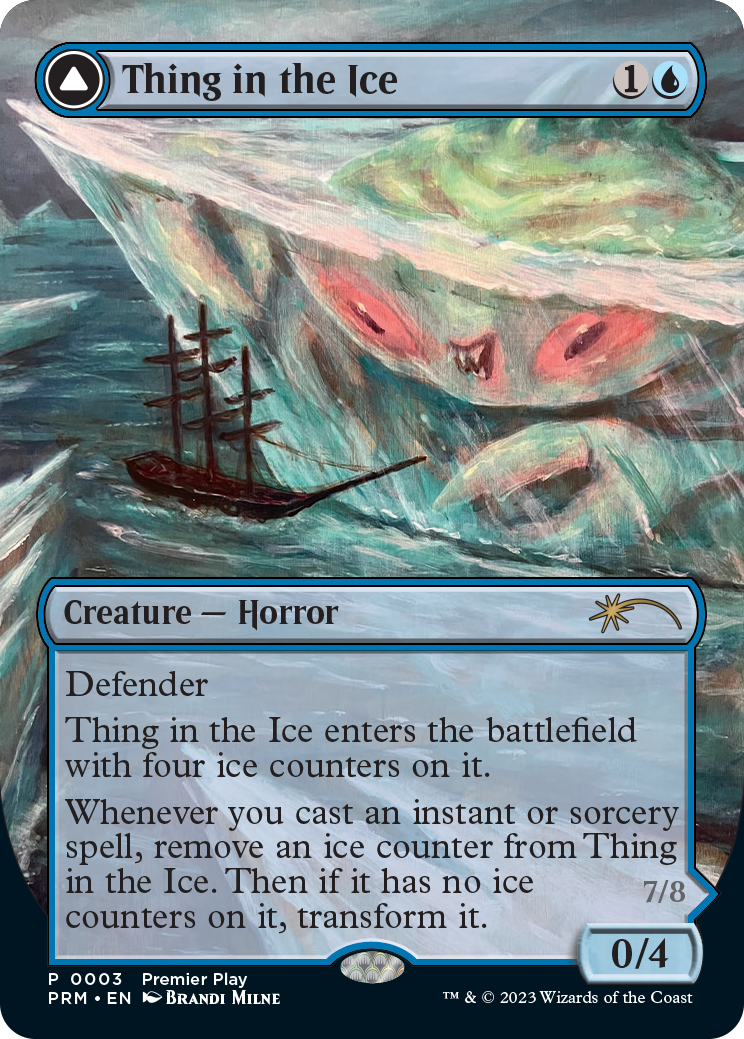 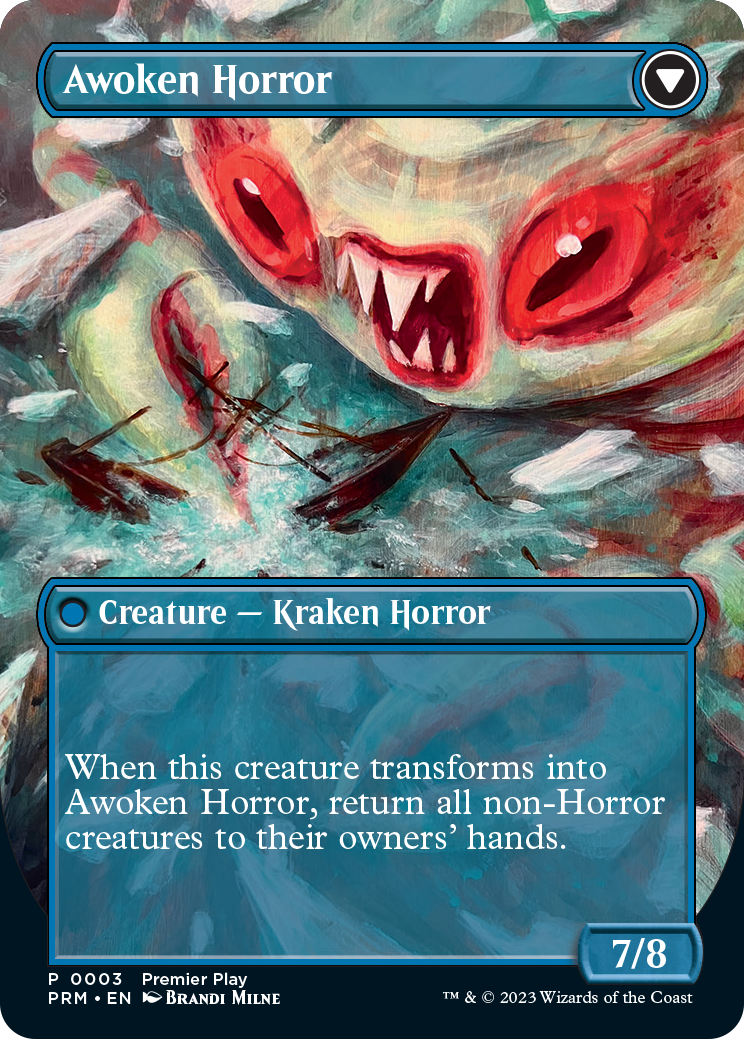 WPN retailers have the opportunity run these events, and they may be hosting one near you, so check with your local store for more details on the what, the when, and the where.

Phyrexia: All Will Be One brings a robust and compleat event schedule, with competitive tabletop play back in action with even more on offer now. No matter what you play in, all the very best in your games and may you have an exciting season filled with action!