Austin Bursavich didn't care that he was playing alone from his bedroom when he won the 2020 Season Grand Finals.

He celebrated in style, turning in a routine for the ages. It was the perfect ending to one of the best underdog stories ever told at the top tables, as Bursavich took home the title after a thrilling rally back from the lower bracket to claim final victory. 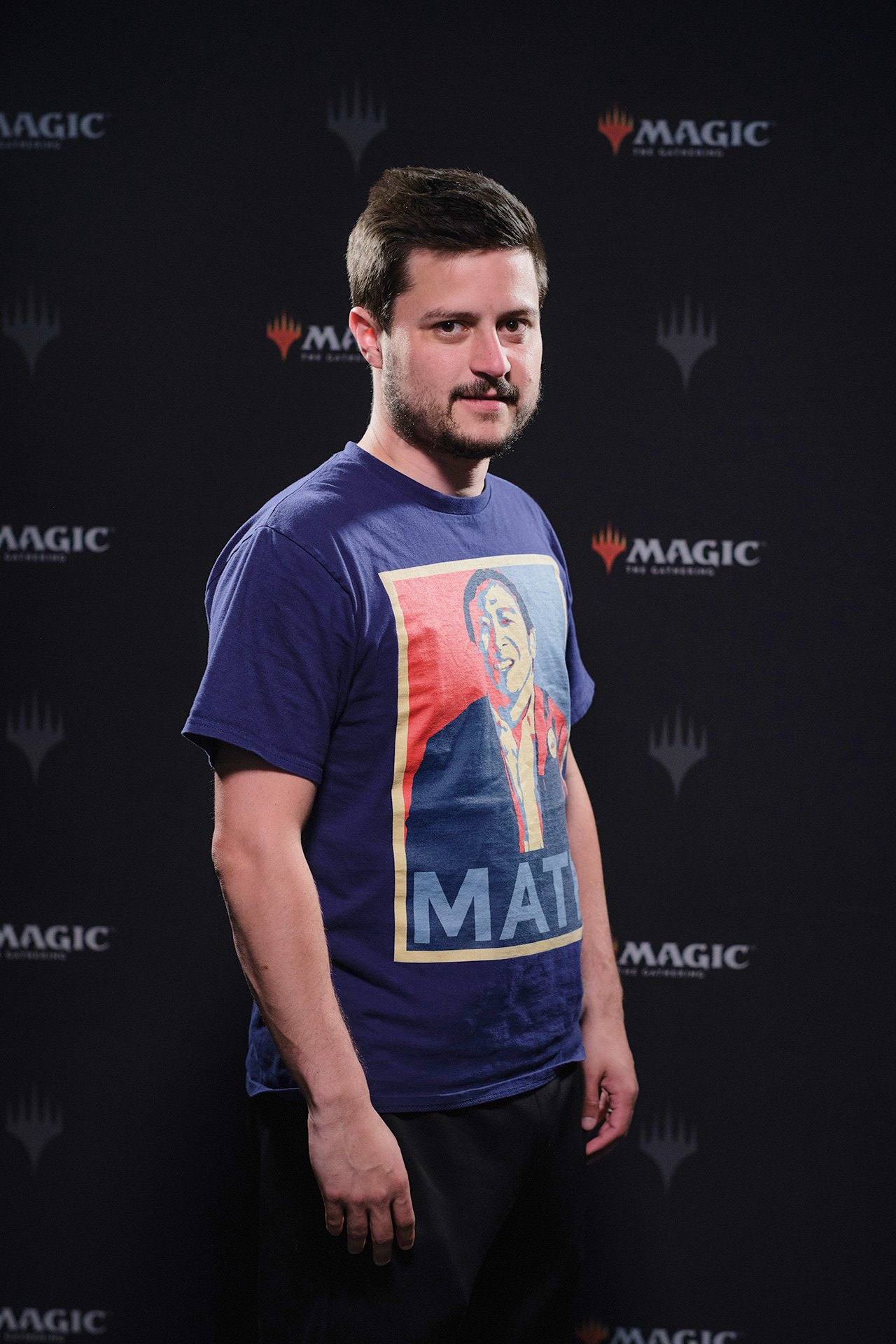 From occasional Pro Tour competitor to now Top 8 mainstay and champion, Bursavich exploded onto the professional Magic scene over the past twelve months. To the casual observer, it seemed a meteoric rise—a star that announced their ascent to the top with a string of performances out of nowhere.

There have been players like that in Magic's history, and one might assume that it's come easily for the 28-year-old. Bursavich just ran a gauntlet through which he won six straight elimination matches, knocking out two Hall of Famers currently in the Magic Pro League plus another MPL member en route to the Grand Finals title. Viewers saw his animated reactions and unshakable confidence. They felt his belief in his team having the best version of the best deck for this event—and most of the past year's. 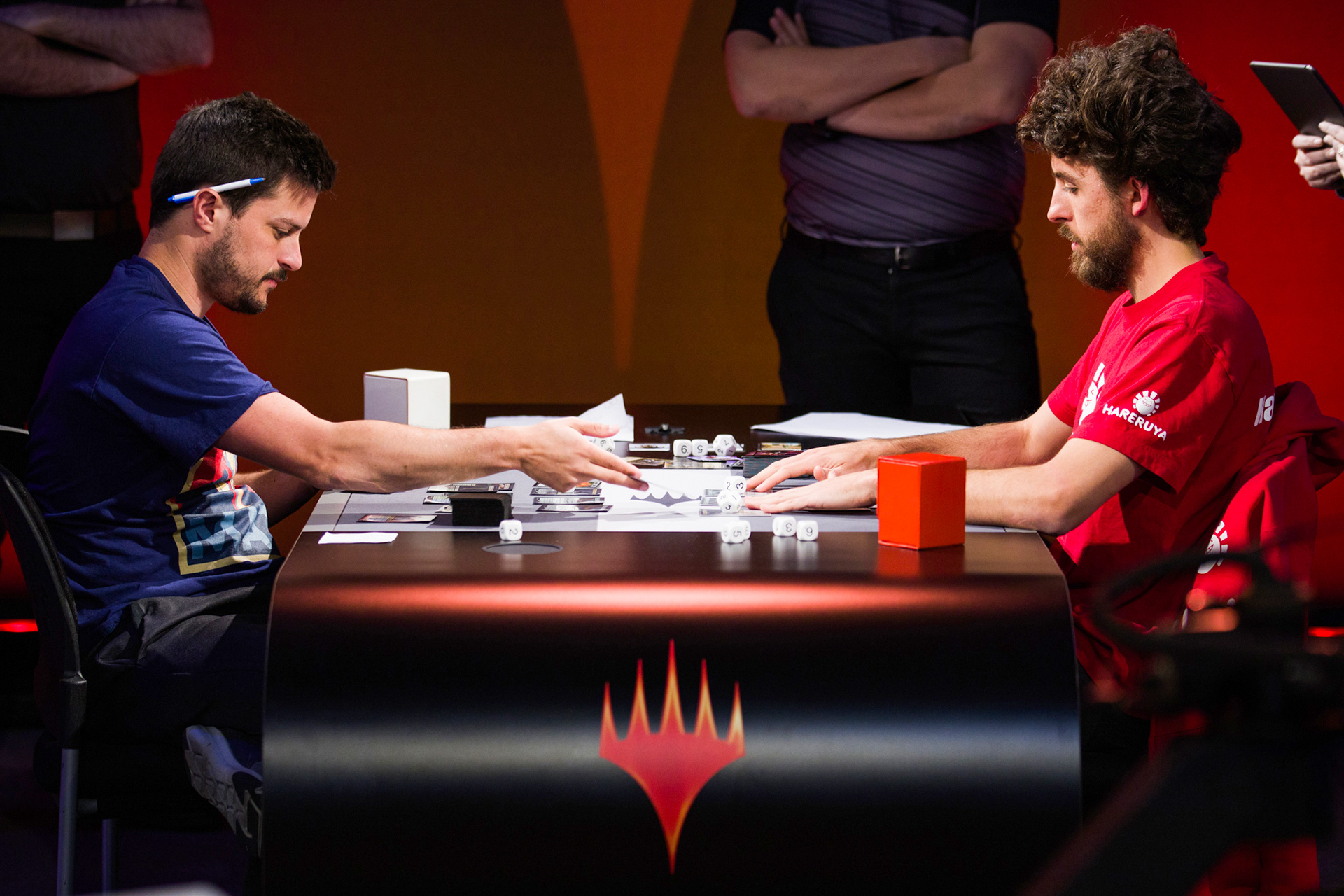 Bursavich looks, for all the world, like the established champion he now is. With three Top Finishes and an additional Top 16 in major events to his name over the last twelve months, only Magic greats such as Gabriel Nassif with four Top Finishes—and who fell to Bursavich in the Grand Finals Top 8—have claim to a better calendar year of success.

It's a "surprise" a decade in the making. The world watched Bursavich defeat two world-class players—Emma Handy and Autumn Burchett—who packed the killer deck of the weekend, but few saw the hours he put into every card choice in his perfectly tuned sideboard. We watched Bursavich kick off his run of success with the Top 8 of Mythic Championship VI with , but no one asked about the 150 Throne of Eldraine drafts he finished that equipped him go 6-0 in Limited. And when we saw Bursavich celebrate his championship, only Bursavich was thinking back to the years of near-misses and what-ifs every longtime competitor carries with them.

There's no mistake: Bursavich's title at the Season Grand Finals isn't just the culmination of a year of high-level play. It's the painstaking result of a decade of dedication to improving beginning with his first Grand Prix Top 8 back in 2011.

"The first time I did well at a PT was at Pro Tour Fate Reforged in 2015; I hadn't prepared well, I just happened to have a good deck and start 8-0," he recalled. "I ended up losing playing for Top 8. I didn't really know exactly how to prepare for a tournament like that."

Making it to a high-level event is one thing, but consistently succeeding at them is another. It's a challenge that has vexed even champions. After coming so close, Bursavich understood just how far he still had to go. 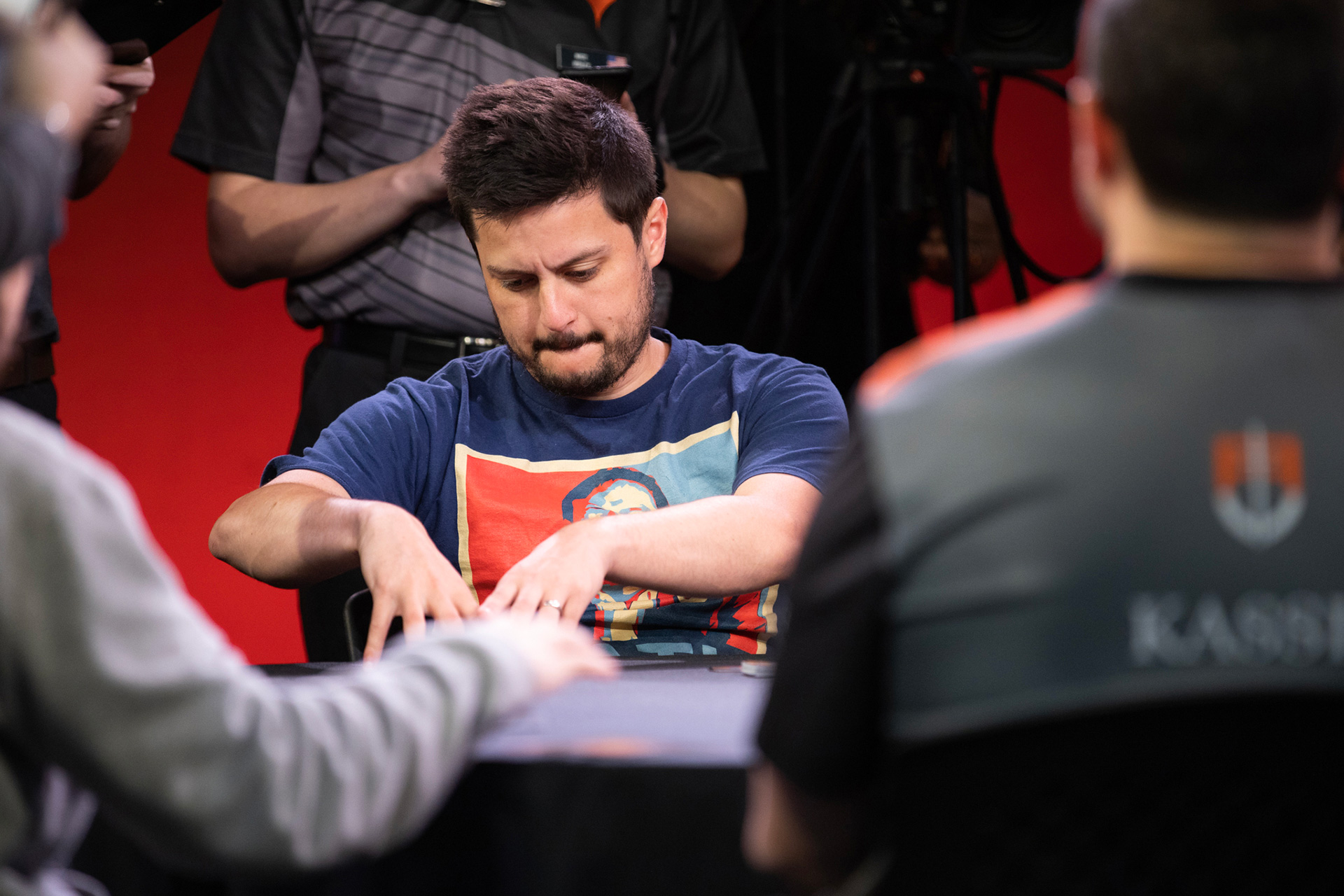 It wasn't the first time he had leveled up in Magic. Just as when he discovered Magic Online in the ninth grade, devouring the intricacies of building the perfect Sealed deck, Bursavich went to work on what it takes to success at the biggest events.

"The biggest difference has been the preparation—when I really began to focus on preparing, I've been able to do well," he said. "I don't get to play much Magic outside of the few weeks leading up to the big tournaments, and I really went all-in for these events."

It took years of work after Bursavich's Grand Prix Top 8 to pay off, but he trusted that he was approaching Magic the right way. "Ever since I started playing Magic, I've had lots of good players help me learn and get better along the way," he said. "After Fate Reforged, I joined Seth Manfield, Brad Nelson, Brian Braun-Duin, Ari Lax, Steve Rubin and a few others, and they really taught me how to prepare for a tournament."

Bursavich learned from those around him at every step and began to level up his own game, and it all came together with his Top 8 in Richmond—then twice more since.

"It's always been about the drive of pushing toward a goal. It started with Friday Night Magic, and within a year I discovered [Pro Tour Qualifiers] and was playing competitively," he explained. "I've never wanted to play Magic as my full-time job, but it has always been that competitive outlet for me."

"I do have a chip on my shoulder: I don't know what tournaments I'll be playing in next year so every tournament it feels like my back is up against the wall," Bursavich said. "I want to qualify for the Rivals League. It keeps getting pushed back and there's so much uncertainty with COVID, but I'm not going to stop until I get it. I want to prove it to myself."

That decision drove Bursavich to commit to Magic as he hadn't before. He joined "Team 5%," built from top players and former champions such as Allen Wu, Ari Lax, and Andrew Elenbogen. Bursavich credited the team for his success over the past year. 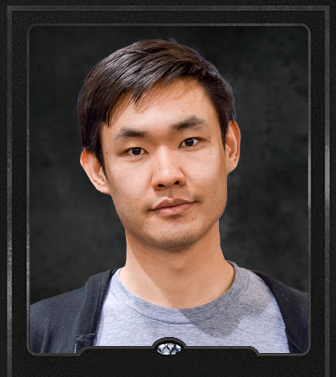 "Allen Wu has been one person with me for every event since then, and he has certainly helped me tremendously," he gushed. "We both have similar styles and approaches to the game. But we work hard and hold each other accountable, and we seem to always end up in a great spot going into every tournament. I wouldn't change a single card in my decks in the last six tournaments."

Beyond the challenges Magic and every competitor has faced this year, Bursavich had more required for his focus: remaining a consistent competitor and attentive father to three young girls. Grand Finals viewers watched Bursavich celebrate from his room, unaware that he had his own watch party in the room behind him—for as long as a two-, three- and six-year-old can stay still, that is.

"Yeah, it's starting to get a little crazy around here," he laughed. "The girls were in bed when I won the tournament, but they knew enough to be excited for me. I've got the trophies from events I've won in the past, and my oldest . . . likes to watch me play MTG Arena. Her favorite card is after she watched me cast it, and now she always asks me about it when I'm playing."

As good as Bursavich has proven himself to be, he pointed out that his successes this year have really been a family affair.

"It's hard to balance all of this and ask my wife or parents to take the girls for the weekend so I can play a tournament, or give me time to prepare," he admitted. "Honestly, it can be very stressful. I'm very fortunate to have such a supportive family. There's no way I could do this without them." 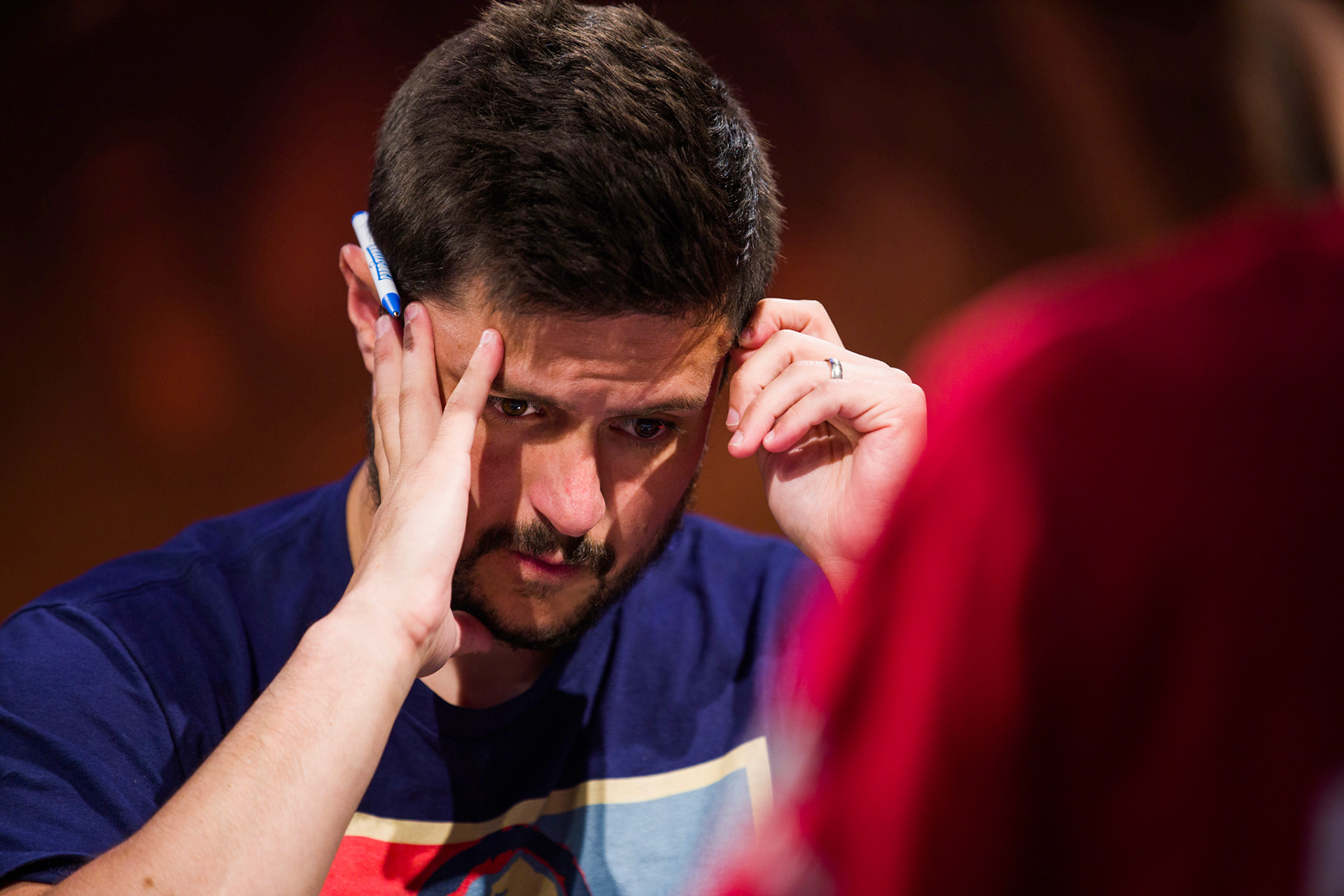 2020 has been a year unlike any other, and it's a testament to both Bursavich and his support system that consistency became his hallmark—even while navigating play from home where you're just as likely to deal with an interruption by a toddler as you are a bad topdeck.

As Day One at the Grand Finals was ending with Bursavich near the top of standings, the winds were beginning to swirl around his house near Baton Rouge, Louisiana. By the time he had tucked his girls in for the night, Hurricane Delta had begun whipping the trees around.

"We're 100 miles inland but we still get bad winds and lose power, and that's what I was really worried about when I went to bed Friday," Bursavich said. "My contingency plan was to get up early and drive four hours to Houston to stay with family to try and play, but we got lucky and didn't lose power even though other houses in the area did."

These aren't the challenges players expect to be dealing with in a Magic tournament, but it's been a year of unique challenges for everyone. Through it all Bursavich continued to put up strong results event after event. With a victory at the Grand Finals capping off an incredible twelve months, the rise of Magic's next superstar may be unfolding in front of us.

It's been a long time coming